The Role Of Intersectionality In Feminism 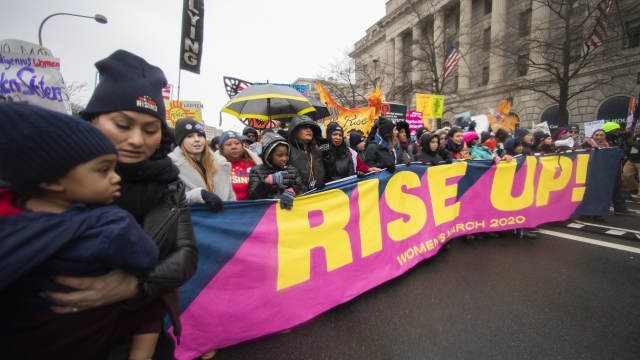 In recent decades, there's been more recognition of how women's rights aren't monolithic. There's growing support for the idea that different groups of women experience inequality or empowerment in different ways, depending on their identities.

That's led to the term intersectionality, which plays into a modern feminist movement that looks to deal with a lot more than just voting or economic opportunities.

In the theory of intersectionality, a woman may have a certain set of disadvantages in society — but other things like race, class, sexuality, religion, even your height are also factors that are accounted for in this framework. The idea is that each person goes through life with a different mix of those traits, that can bring advantages or disadvantages in society depending on the situation.

It's a theory that has drawn some controversy, but the idea that different factors help or hurt you in life is one with some agreement. A 2021 Pew poll found nearly six in 10 adults in the U.S. say white people benefit at least a fair amount from advantages in society that Black people do not have.

Advocates want to use the theory of intersectionality to account for differences between people. They want to promote a more equal society for marginalized groups that have long been overlooked and want to make sure that people of different races, sexualities, or other unchangeable traits aren't left behind in conversations about equality.

Intersectionality also serves as a way of looking at how institutions in society – laws, company policies, behaviors – all internalize discrimination.

Intersectionality was coined by Kimberle Crenshaw, who was also one of the first legal scholars to develop the idea of critical race theory. The two share some common underlying ideas, but CRT focuses more on how racism specifically has been built into systems of power.

Intersectional feminism came in response to the idea that the first two major waves of feminism in the U.S. – in the 19th and early 20th centuries and then in the 1960s and 70s – focused a lot on white, middle class women.

Beginning in the 1980s, intersectional feminists pushed for more inclusion of the experiences of women of color, women who are poor or immigrants or of different faiths.

Since then, they have not only called for a movement more representative of different identities, they want to see a broader scope of issues be considered as women's rights issues, again with the idea that things intersect.

But from an intersectional viewpoint, issues like raising the minimum wage, helping protect immigrants and expanding child care are all factors tied to abortion and women's health.

It's led to criticism of "white feminism." Those critics are hoping feminism can broaden its horizons and do more good for more people.