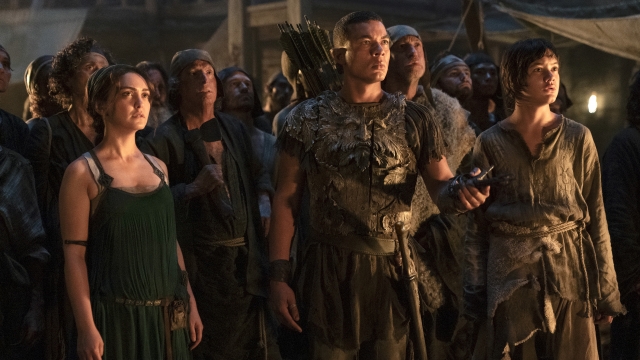 SMS
'The Rings Of Power' Cast Discuss Hopes For The New Amazon Adaptation
By Casey Mendoza
By Casey Mendoza
September 1, 2022
Amazon invested $1 billion in its new "Lord of the Rings" adaptation, "The Rings of Power," and its cast hopes it'll bring longtime and new fans.

"The Rings of Power" is the biggest gamble in TV and streaming history.

With a $1 billion investment from Amazon, the series based on the lore of J.R.R. Tolkien's "Lord of the Rings" series hopes to welcome both longtime fans and new viewers to Middle Earth.

"The beautiful thing about our show is that it's a healthy balance of old and new," said Nazanin Boniadi, who plays Bronwyn in "The Rings of Power."

"It's going to turn a whole new viewership on to Tolkien," said Benjamin Walker, who plays the High King Gil-galad in the series.

The series is set thousands of years before the stories of "The Hobbit" and "The Lord of the Rings," which have grossed more than $1.8 billion as a film franchise since the release of the 1978 animated movie.

The story's foray into television will include five seasons, with the first season having eight episodes.

"I think the beauty of TV is that you have that intimate bond with the audience," Boniadi said.

"We get to luxuriate in the worlds," Walker said. "We get to be fully immersed in each little kingdom and each little fantastical world."

But beyond its artistic ambitions, Amazon's investments into "The Rings of Power" are part of the company's strategy for streaming dominance.

While the platform found critical success with its superhero drama "The Boys" and its period comedy "The Marvelous Mrs. Maisel," Amazon is still competing against the larger libraries of prestige programming from Netflix, Disney+ and HBO Max.

Its biggest competitor in the fantasy world is most notably HBO Max's "Game of Thrones" spinoff "House of the Dragon," which garnered a record-breaking 10 million viewers when it debuted in August.

"The Rings of Power" premiered Sept. 1, and the first season will conclude on Oct. 14.