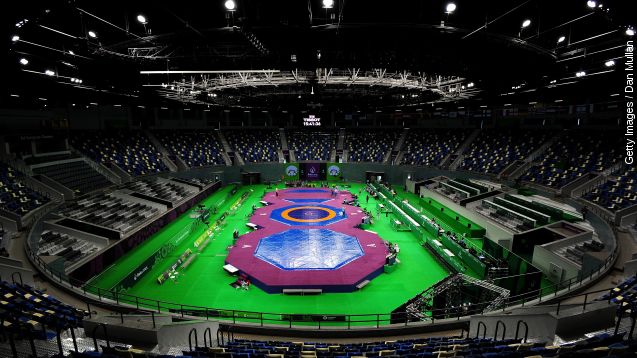 Whether it's Russia's Winter Olympic Games, Bahrain's Formula One race, or the upcoming FIFA World Cup in Qatar, these days, it seems authoritarian regimes are the only ones willing to host mega-sporting events.

For 16 days starting Friday, the former Soviet republic will play host to 6,000 athletes from 50 countries as part of the first-ever European Games. (Video via Azerbaijan Ministry of Culture and Tourism)

This event is supposed to be like a mini-Olympics just for Europeans. You know, an opportunity to not only showcase athleticism but to promote human dignity and social responsibility.

Which is why the European Olympic Committees' decision to award Azerbaijan — a country better known for crushing dissent and jailing journalists — is a bit perplexing.

The organization offered up this defense back in April: "It is not the EOC's place to challenge or pass judgment on the legal or political processes of a sovereign nation."

Processes that apparently include locking up journalists and activists critical of the government. (Video via Human Rights Watch)

Among them — Khadija Ismayilova, an award-winning correspondent for Radio Free Europe/Radio Liberty. She was detained in December on a range of charges Human Rights Watch calls "bogus." (Video via PEN America)

Then there’s Rasul Jafarov, who launched a campaign to highlight human rights violations ahead of the European Games. He just spent his 30th birthday in a jail cell. (Video via Obyektiv TV)

According to The Wall Street Journal, "Azerbaijan has twice as many political prisoners as Russia and Belarus combined."

And now, The Guardian has announced it's among the foreign news outlets barred from entering the country to report on the games.

A delegation from Amnesty International was also forced to cancel its visit in what the group called "desperate attempts" on the part of authorities "to create a criticism-free zone around the Games."

So, out with the critics, and in with the smiling athletes and lavish venues. If you're looking to bolster your cred on the world stage, that's one way to do it. (Video via Human Rights Watch, Baku 2015 European Games)

Don't expect things to change. The Formula One Grand Prix will be held in Azerbaijan next year, and the country is expected to bid for the 2024 Summer Olympics.