The Push To Proclaim The Message Of Climate Change 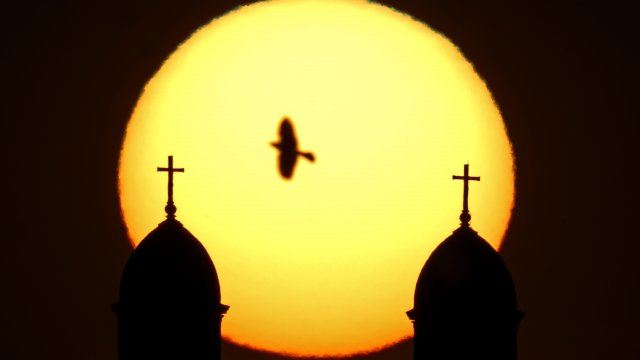 SMS
The Push To Proclaim The Message Of Climate Change
By Amber Strong
By Amber Strong
November 5, 2021
Sixty percent of Christians polled said it was a top priority or important for Congress to pass a bill addressing climate change.
SHOW TRANSCRIPT

When it comes to matters of faith and the environment, there seems to be a growing interdenominational acceptance that the climate is changing.

"I don't think we have the luxury of time to not talk about this in really serious ways," said Chris Doran, professor of religion and sustainability at Pepperdine University.

Doran has spoken to fellow Christians about climate change for years now.

"The very link of who we are is tied to the Earth, because God fashioned us, according to that Genesis 2 story, out of the Earth, and there's a link between how the humans manage the soil and how the soil then can care for human beings," said Doran.

Episcopal rector Donna Mote says her desire to do more for the planet also comes from the biblical story of creation.

That push for religious involvement in slowing climate change isn't unique to Doran and Mote. In June, 3,400 faith leaders across the country signed a letter calling on members of Congress to support the president's climate initiatives. According to a Morning Consult/ Politico poll, 60% of all Christians said it was a top priority or important for Congress to pass a bill addressing climate change.

Pope Francis is perhaps the most widely recognized advocate. In 2015, he blew the lid off of the faith and climate conversation with his encyclical on the moral obligation to take care of our "common home."

"I'm convinced that we can make a difference. I'm sure," the pope said.

"There are still people who do not believe climate change is real," said Father John Baker of The Basilica of Saint Mary of the Sea. "And they say things like, 'I'm not a scientist.' Well, Pope Francis is a scientist; he has a chemistry background."

In Florida, against the backdrop of rising sea levels and flooding, Baker says 450 faith leaders recently joined together to discuss environment issues.

"We have to proclaim this is the reality of our life," said Baker, "and we have to work together to do better."

Doran and Mote say the faith and environment conversation is imperative, for more reasons than one.

"More and more people on the move through migration events are more and more people being disrupted by heat waves, and elderly folks in our churches being disrupted by extreme heat and extreme cold," said Doran. "I think there's going to be a time very, very soon where — at least I argue this in a number of places —we're seeing more and more younger Christians, Protestants, evangelicals say, 'If you're not going to take climate change seriously, how am I as a young person?' So someone may be under the age of 30? How am I supposed to take you seriously as a church leader?"