How Are Refugees Resettled In The U.S.? 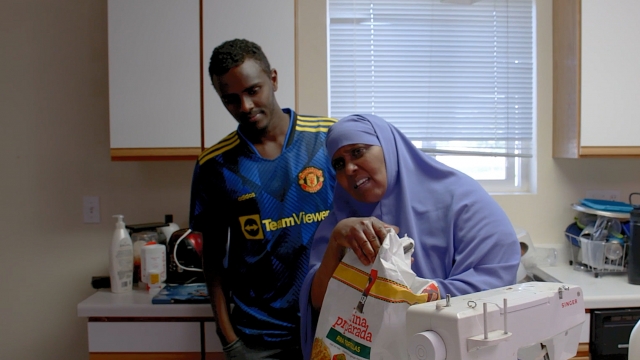 A mother is making a snack for her son. It's something she hasn't been able to do in nearly a decade. Hawo Hassan earned refugee status in the United States back in 2013. She's made a home here, in Grand Forks, North Dakota. Souleiman — her only child to be left behind in Uganda — arrived just this year. He's 26.

She began the process to bring him over as soon as she arrived. At first, Souleiman was immediately accepted and expected to join his mother within a couple of years. But, once Donald Trump was elected, everything changed.

"Everything have to begin from zero," Souleiman said. "You guys going to start everything afresh. So the forms that I filled out in 2014 — I signed in 2014, November — I had to sign again in 2019. I give up at a point — thought maybe it is not going to happen."

The Trump administration slashed refugee quotas, bringing the number resettled in every state to the lowest in years, even in North Dakota — one of the leaders in refugees per capita.

Questions surrounding the vetting process and the cost of refugees in communities have made this a national debate. But what are the facts? How does this work? Before refugees even set foot on U.S. soil, they've already been vetted for years.

Once approved, they're taken to U.S. military bases in other countries where they undergo even further vetting. Each person goes through six background checks including with the FBI, Homeland Security and Bureau of Counterterrorism. They also undergo health screenings and now, they are given the COVID-19 vaccine.

Once cleared, they're flown to their selected city where a resettlement agency meets them and takes them to their new home, set up with furniture and stocked with food. But that's not the last step.

Dan Hannaher, the field director for North Dakota's Lutheran Immigration and Refugee Service, helps resettle refugees. He  says: "We are taking them to the Social Security office to apply for a Social Security number because that's the first step towards employment and self sufficiency. It's very important to get them employed as quickly as we can. We get their children — if they have them — enrolled in school. Connect the adults to English as a second language education if needed through our adult learning center.

So who pays for all of this? The federal government foots most of the bill.

The first 90 days are covered by the State Department — setting them up with their apartment and basic needs while they look for work. After that, there are refugee support service programs run by the state and funded by the federal government. This includes other government assistance like Medicaid and food stamps. Various programs continue for up to five years. After that, they're on their own.

"The No. 1 goal is to make them free and clear," Hannaher said.

Hannaher's goal is to find refugees jobs as quickly as possible — getting them work, and paying taxes. In general, it works. Most studies show over time refugees pay more in taxes than they collect in benefits.

Typically, refugees are resettled in communities with others from the same country.

In North Dakota, it's mostly people from African countries and Syria. But in light of the mass evacuation in Afghanistan, the state has agreed to take in 49 refugees. Some, including elected leaders, are not on board.

Steve Bakken is the mayor of Bismarck, North Dakota. The Republican has publicly opposed refugee resettlement in his city and says taxpayer dollars are already stretched thin.

"We don't have the resources here to handle that," he said. "If somebody is resettled here and has four or five kids, if those kids don't speak English, what are we doing to the taxpayers in the school district? That's a big burden."

He says his opinion hasn't changed in the years since President Trump made this a campaign issue.

It's even more solidified now, as the country nears full employment and more refugees will be looking for jobs. He doesn't want to see any more refugees in Bismarck.

"There are language barriers, there's cultural barriers — that takes time until somebody is fully familiar with how to fit in within society — then you're setting them up to fail," Bakken said.

But Hawo doesn't feel that way. She's thrilled with her job at Walmart — and the future it has provided for her family. Souleiman, who already has an associate's degree, believes he's got a bright future here and says his goals are the same as any person.

"Most of them have seen hard life where they come from," Souleiman said. "They just come in to make their life and get a better life for themselves and the people they leave back home."