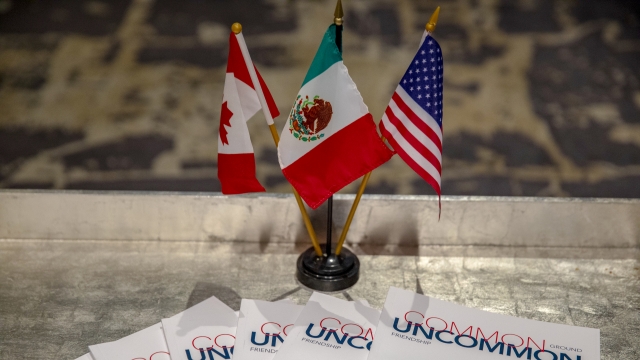 One of President Donald Trump's campaign promises was to renegotiate the North American Free Trade Agreement.

"A Trump administration will renegotiate NAFTA and if we don't get the deal we want, we will terminate NAFTA and get a much better deal for our workers and our companies. 100 percent," then president-candidate Trump said in November 2016.

NAFTA eliminates trade taxes and eases trade restrictions between the U.S, Canada and Mexico. Then-President Bill Clinton implemented the deal in 1993, and it went into effect in 1994. The agreement was the first in U.S. history to let a wealthy country and a much poorer country trade on the same level.

President Trump has repeatedly called  NAFTA "unfair." He's blamed it for the exodus of manufacturing jobs from the U.S. to Mexico. Economists say most of those jobs have been lost to other factors like recessions and automation.

In August 2017, the U.S., Mexico and Canada launched NAFTA renegotiation talks. But tensions rose between the countries after the U.S. imposed import tariffs on Canadian and Mexican steel and aluminum. Canada and Mexico slapped tariffs on the U.S. in return.

A spokesperson for the country's then-foreign minister said the country would only sign something that was good for Canada and good for the middle class.

The sticking point between Mexico and the U.S. was reworking automotive industry rules. Among other things, the U.S. wanted to raise the percentage of a car's parts that must be sourced from North America in order to qualify for reduced tariffs under NAFTA.

After months of back and forth and negotiations, President Trump announced a new trade deal between the U.S., Mexico and Canada in October 2018.

"It is my great honor to announce that we have successfully completed negotiations on a brand new deal to terminate and replace NAFTA and the NAFTA agreements with an incredible new U.S.-Mexico-Canada agreement," he said at the time. "The agreement will govern nearly $1.2 trillion in trade, which makes it the biggest trade deal in the United States."

The three countries signed the agreement just a month later.

"This has been a battle, and battles sometimes make great friendships, so it's really terrific," said Trump.

But House Democrats refused to sign off on the new deal over concerns about the agreement's enforcement of environmental standards and labor laws. House Speaker Nancy Pelosi said the lower chamber wouldn't even consider a vote on the so-called USMCA until Mexico moved forward on legislation to protect workers' rights.

Democratic representatives later agreed to back the agreement. It passed the House in December and the Senate in mid-January.

Even with President Trump's signature, the deal won't go into effect until it's ratified by all three countries.