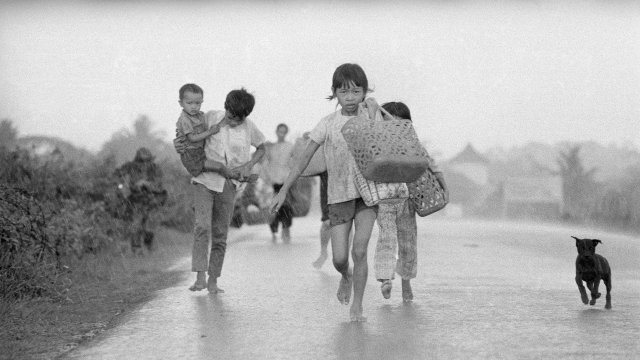 "I said I don't want to leave because I know she will die," Ut said. "Then, I picked her up, put her in the van and I took her to the hospital."

In a single image, Ut showed the world the horror and hopelessness of the Vietnam war. It won the Pulitzer Prize in 1973, not long after U.S. forces began pulling out.

Today, with a gun violence epidemic infecting every corner of America, newsrooms are wrestling with new questions about graphic photos and just how much the public should see.

"You know, there are images of these shootings that law enforcement and frankly we in the news media, that we don't share with you, because they're so horrific. They're so awful. But maybe we should," CNN's Jake Tapper said.

After all, powerful images can ignite social change. In 1955, gruesome photos published in Jet Magazine of Emmett Till beaten and murdered in Mississippi exposed America's racism and helped spark the civil rights movement.

But, would shocking photos of mass shooting victims spur the public and lawmakers to say "no more?" The answer, says John Temple, is complicated.

"I worried all night when I ran the picture of a dead child," he said.

In 1999, Temple was the editor of the Rocky Mountain News when two gunmen attacked Columbine High School. He made the decision to publish a photo.

"We felt it was really important because if you wanted to see the horror of that day, it was all evident in that photo," he said. "There was the cop with the gun, the students cowering, a dead body on the sidewalk."

"It's dangerous to publish ... To open a door that introduces the concept that 'I could do something even more horrific,' which is what we know some mass killers would like to do.  And it normalizes violence," he said.

The mother of that Columbine student eventually wrote Temple, saying he was right to publish the photo, to not sanitize the story. But in the internet era, where a picture worth a thousand words can also attract a thousand trolls, Temple says the goal is finding an image that tells an accurate story — one that makes audiences look, but doesn't shock them into looking away.

"Would journalists publish Nick Ut's photo today if it was coming out of Ukraine? I'm not convinced they would," he said.