The Pope Calls Space And Gets Deep With Astronauts 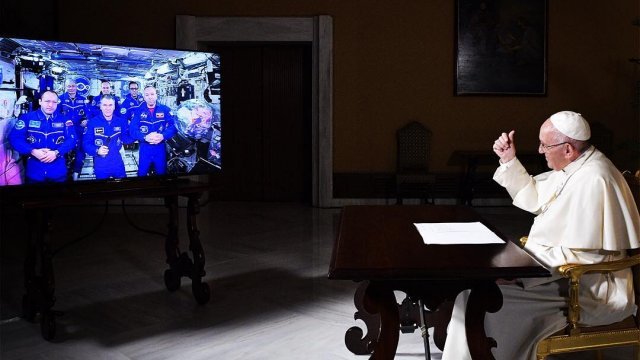 SMS
The Pope Calls Space And Gets Deep With Astronauts
By Gabrielle Ware
By Gabrielle Ware
October 26, 2017
The pope and the International Space Station crew pondered philosophical issues for about 20 minutes.
SHOW TRANSCRIPT

Pope Francis got deep with the International Space Station crew on Thursday. They had around 20 minutes of philosophical conversation about love, joy and our place in the world.

The pope said the six astronauts had the rare opportunity to see the planet "from the eyes of God," and that, "Astronomy makes us think about the universe's boundless horizons and prompts questions such as 'where do we come from, where are we going?'"

Italian astronaut Paolo Nespoli told the pope, "Our aim here is to spread knowledge, [but] the more we learn, the more we realize we do not know."

The only other pope to do a virtual visit was Pope Benedict XVI in 2011. He asked the crew how being in space affected their views on the universe, humanity and praised them for their courage.

Francis has a history of melding science with his faith; the pontiff is an outspoken proponent of the scientific predictions on climate change.