The Pooh Identity: Is Winnie The Pooh Actually A Girl? 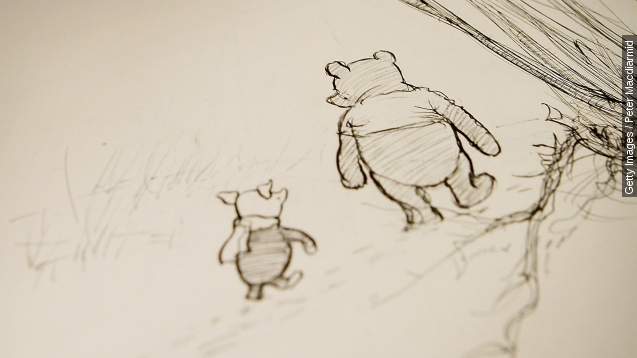 If you're at all familiar with this silly old honey-obsessed bear, it's probably thanks to these classic cartoons.

But now some outlets accuse Disney of lying to us all these years — apparently, Winnie the Pooh's voice should have been a bit more feminine.

That's unintentionally thanks to author Lindsay Mattick, who recently published a new book exploring the real-life story behind Winnie the Pooh. Mattick's great-grandfather purchased the original "Winnie" as a pet bear during World War I.

"He knew that the world would not be a safe place for a little cub. So at that point, he took her to the London Zoo and that's where she met lots of visitors — in particular the author A.A. Milne and his son Christopher Robin," Mattick told The Huffington Post.

Mattick's book notes two big facts about the original bear cub: she was named "Winnie" after the Canadian city Winnipeg, and she was, well, female. It's the second revelation that's getting the Internet's goat at the moment.

Throughout A.A. Milne's original stories, Winnie the Pooh is constantly referred to with male pronouns. Christopher Robin even explains to Milne that his male bear doesn't have a girl's name; it's not Winnie, it's "Winnie-ther-Pooh. Don't you know what 'ther' means?" Milne apparently didn't press the issue any further.

So, yes, Winnie the Pooh was based on a female bear, but both Milne and Robin are pretty insistent that the character is male. And since he's able to get away with not wearing pants ever, Pooh's gender seems like kind of a moot point.