The Politician's Guide To The Word 'Genocide' 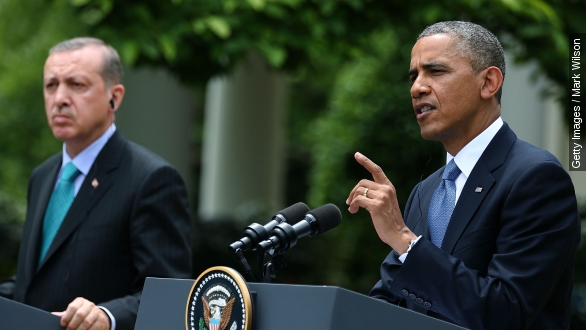 A century ago, some 1.5 million Armenians were slaughtered by Ottoman Turks in what historians have widely labeled a genocide.

As has President Obama — before he was president.

"There was a genocide that did take place against the Armenian people," Obama said in 2007.

But on Friday when he marks the 100th anniversary of the mass killings, chances are he won't put it quite like that.

Every year when April 24 rolls around, the White House releases a carefully worded statement that avoids using the word "genocide." And every year, the statement includes this line: "I have consistently stated my own view of what occurred in 1915, and my view has not changed."

It's no secret what Obama's view is. (Video via The White House)

He made it pretty clear when he was a U.S. senator. Here's his name on a 2005 letter urging President Bush to describe the killings as a genocide.

Two years later, he lent his support to this resolution recognizing the massacre as a genocide.

And when on the campaign trail in '08, Obama pledged to the Armenian-American community he would continue using the term if elected. (Video via Democratic National Convention)

It's been over six years he took office, and not once has he publicly called the Armenians killings a genocide. And he won't this year either, according to White House officials.

Though to be fair, with the exception of Ronald Reagan, neither have his predecessors.

That's because doing so would risk alienating Turkey — a NATO ally and key partner in the Middle East.

"I value so much the partnership that I've been able to develop with Prime Minister Erdogan," Obama said at a 2013 press conference with the Turkish prime minister.

Turkish authorities deny a systematic and deliberate annihilation of Armenians took place. They acknowledge the killings but say they were part of a broader civil conflict during World War I.

The governments of about 20 other countries plus the Vatican disagree, each formally recognizing the Armenian genocide.

In a statement Tuesday, the Armenian National Committee of America chairman called Obama's reluctance to do the same a "betrayal of truth."

This video includes images from Henry Morgenthau and the U.S. Library of Congress.