The People's Republic Of China Celebrates Its 70th Birthday 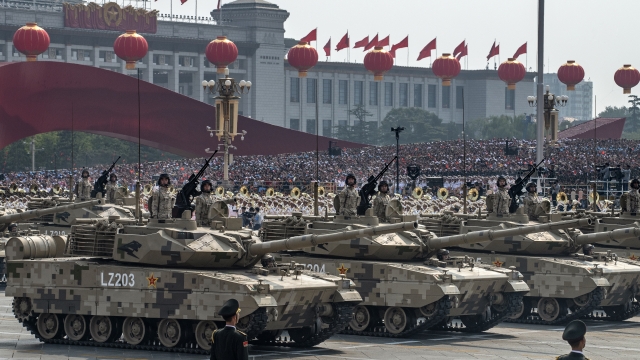 The People's Republic of China is celebrating 70 years since its founding under the Communist Party.

And it's a pretty big day for the Communist state, especially since it's now outlasted the Soviet Union's 69 years. But the celebrations on the Chinese mainland didn't stop thousands of people in Hong Kong from protesting Tuesday.

Before we dive into that, let's go back 80-something years. In the late 1930s, China was effectively split into three regions: Nationalist China — which controlled the government — Communist China, and areas occupied by Japan.

Fast forward to 1945. Japan accepted surrender terms and left China. The remaining Communist and Nationalist forces fought for control of resources and population centers. There was a brief time where it looked like the two groups might work together toward a united China, but fighting broke out before anything became official.

Years later, the expensive war ended when Communist leader Mao Zedong officially declared the establishment of the People's Republic of China on Oct. 1, 1949. To this day, there are images of Mao sprinkled around China.

As per tradition, China held celebrations to mark the holiday, including a massive military parade in Beijing.

But over in Hong Kong, police and anti-government demonstrators faced off in multiple districts. Things once again turned violent Tuesday, with protesters reportedly throwing bricks and Molotov cocktails at police, who fired tear gas in return.