The Ozone Layer Is Recovering, But It's Not All Good News 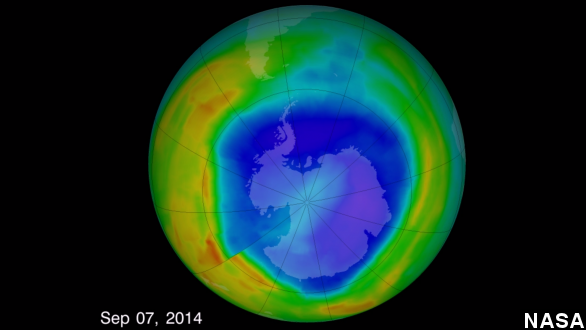 SMS
The Ozone Layer Is Recovering, But It's Not All Good News

By Sebastian Martinez
September 11, 2014
The Ozone layer is recovering thickness! Hooray! But in helping its recovery, we may have also helped put more greenhouse gases out there. Hooray?
SHOW TRANSCRIPT

For the first time in decades, Earth's ozone layer is actually showing signs of recovering! Hooray! (Video via NASA)

A United Nations report found the levels of ozone in the stratosphere — where the ozone layer is located — are increasing, as the number of ozone-depleting substances, ODSs, decrease.

The ozone layer came to public prominence in the 1980s, when scientists warned it was decreasing due to the popular use of ODSs in aerosol cans and some appliances. Then with the Montreal Protocol in 1987, almost 200 countries signed on to stop using them, and in the next decades the decrease leveled off. (Video via NASA)

So the news that it is actually increasing now is cause for celebration, right? Some outlets certainly took it that way.

MSNBC: "And a rare piece of good news for the environment: a United Nations environmental panel says the earth's ozone layer is beginning to recover!"

STEPHANIE ABRAMS, THE WEATHER CHANNEL: "For the first time in 35 years, the earth's ozone layer is recovering—"

But in ozone-news tradition — it's not all good.

As The Independent reports, by looking to avoid the use of ODSs, we've been using substitutes that, "are potent global warming gases, contributing emissions growing at a rate of about seven per cent annually, and can be expected to 'very significantly' affect climate change."

A decade after the Montreal Protocol, the U.N. coordinated the Kyoto Protocol, which looked to reduce those gas emissions, but it wasn't nearly as successful.

KIKO ITASAKE, NBC: "Many say the U.S., the world's largest polluter, should agree to higher targets for the reduction of greenhouse gases."

The U.S. didn't, and only a fraction of the countries from the Montreal Protocol ratified it. One reason could be that greenhouse gas producers are much more prevalent than ODSs.

ROGER HARRABIN, BBC: "It's so much more difficult: our cars, homes, factories all contribute to heating the planet. This problem may not get solved at all."

Scientists predict the ozone layer will be back to 1980 levels by the middle of the century.