The Other, Unlikely Winner Of Supreme Court's Historic Week 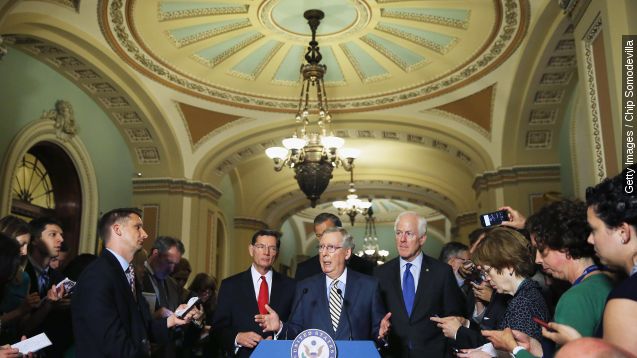 “Today is a victory for hardworking Americans," President Obama said.

“This ruling is a victory for America," President Obama said.

We know what you’re thinking. Yes, publicly, the Supreme Court’s rulings this week on the Affordable Care Act and and gay marriage were a loss for the GOP. But privately, we’ve got to think there are more than a few Republicans relieved at the news.

Imagine the political fallout had the Supreme Court ruled against the administration and effectively gutted the Affordable Care Act.

Millions of Americans across 34 states — most of them red states —  would have lost their insurance subsidies.

It would have been a mess — one the Republican-controlled Congress would have likely had to clean up. And while Republicans had been floating a few contingency plans for that scenario, they weren’t able to coalesce around one.  (Video via House Republicans)

In a sense, this way Republicans get the best of both worlds. They can continue to rail against the law without actually dealing with it.

And if the Republican outrage on Twitter was any indication, that’s what they’ll do.

As for the court’s decision on same-sex marriage, that also seemed to give some Republicans an out.

“We'll honor what the Supreme Court does —  it's the law of the land,” said John Kasich, governor of Ohio and a Republican.

While gay marriage might have been an effective wedge issue in 2012, it’s not the conservative battle cry it once was. (Video via PBS)

Now that most of the country supports same sex marriage, including the majority young Republicans.

Increasingly in the minority on this issue, for a lot of Republicans, same-sex marriage is a subject they’d rather avoid talking about.

With that in mind, Chris Cillizza of The Washington Post writes: “The court just threw Republican candidates a life preserver. They would do well to grab it.” Quite a few of them did.

Lindsay Graham vowed not to pursue a “a divisive effort that would be doomed to fail.”

And from Jeb Bush: “good people who have opposing views should be able to live side by side.”

So while Obamacare supporters and the LGBT community can now celebrate a historic 2015, Republicans can breathe one big sigh of relief two hot button issues are off the table for 2016.