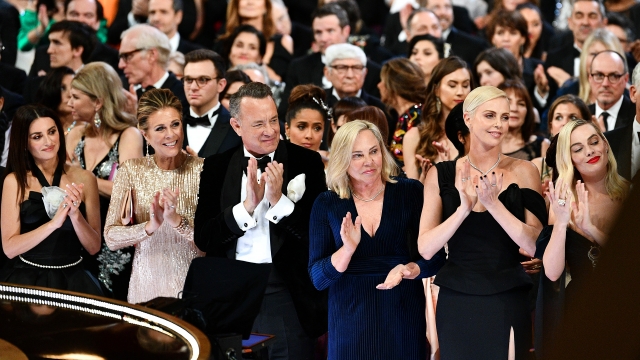 SMS
The Oscars Aren't Alone: Viewership Is Down Across Many Award Shows
By Katherine Biek
By Katherine Biek
February 11, 2020
Sunday's telecast on ABC drew an average of 23.6 million viewers — making it the least-watched show in Oscars history.
SHOW TRANSCRIPT

History was made at the 92nd Academy Awards. But fewer people than ever were tuning in to watch it happen.

Sunday's telecast on ABC drew an average of 23.6 million viewers — making it the least-watched show in Oscars history.

It's a harsh blow to the Academy, which was hoping some surprise musical performances, the show's brisk pacing and a number of blockbuster nominees would help draw in viewers.

This year's Oscars aren't an anomaly. Viewership was also down across the Grammys, Golden Globes and the Primetime Emmy Awards — with the latter drawing in less than 7 million people.

So what might be causing the American public to not want to watch Hollywood essentially give itself a pat on the back?

For one — cord-cutting and the rise of streaming platforms have resulted in TV viewership declining across the board.

The market is also oversaturated with award shows. From the big shows to the smaller ones — like the People's Choice Awards and the CMA Awards — people can watch the industry celebrate itself more than a dozen times a year.

And lastly — there are way more movies, TV shows and music offerings than there were even a couple of years ago. And with so many options, it's likely some people will have never watched or listened to most of the nominees at any one award show.

The Academy has already selected a date for next year's Oscars — so the show isn't going anywhere. But it might find it necessary to continue retooling the format of the telecast to hopefully draw in some more viewers.