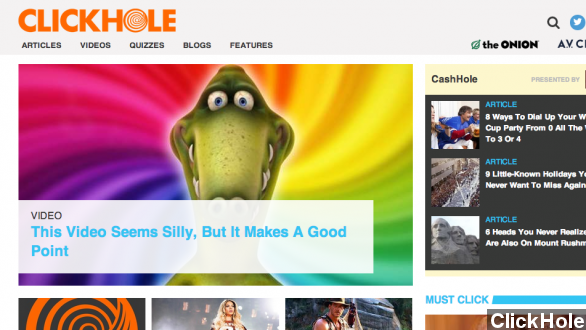 By Christian Bryant
June 12, 2014
The Onion launched its new site this week. According to ClickHole's "About" section, its editors believe, "All web content deserves to go viral."
SHOW TRANSCRIPT

Are you interested in photos of Beyonce not falling into quicksand? What about an opinion piece arguing for the public execution of Ronald McDonald? Or maybe you believe Gary Sinise is a big reason why life is just plain awesome! (Via Flickr / Nat Ch Villa, Marco, Roslyn)

Well, now there's a website, or chasm, into which you can throw all of your time. The Buzzfeed-esque, click-baity website ClickHole launched this week, and... we're not sure if we're even allowed to say ClickHole.

According to Mashable, ClickHole will feature all the same things you would find on viral sites like Buzzfeed and Upworthy, including listicles, quizzes and "sponsored" content — only all of it is made-up satirical nonsense.

ClickHole was created by the folks from The Onion, "America's Finest News Source" and the site some of your Facebook friends still think is a legitimate news outlet.

Some writers consider it to be "a wiseass answer to Buzzfeed's gaping vortex of clickbait" while others believe "it's The Onion's greatest gift to the internet." (Via Refinery29, The Verge)

ClickHole calls itself an "online social experience filled with the most clickable, irresistibly shareable content," and it operates with a core belief: "All web content deserves to go viral." ​This is how it all ends, folks.

ClickHole was announced at The Onion's NewFronts event back in April. While the site parodies the articles, videos and images disseminated by news media, The Onion's Managing Editor Ben Berkley told Fast Company there's another purpose.

Berkley says, "For us, ClickHole is just another mirror we can hold up to society. There's a lot of this 'Internet content' that's just so vapid and reductive--that's counter-productive to the greater good ... ClickHole is just a cool new medium for us to tell jokes through."

By most accounts, ClickHole roared out of the gate, but can they keep it up? A writer at TechCrunch believes that'll be the site's biggest challenge. He writes, "The pool of content that feeds these actual sites is already incredibly shallow, so theoretically the stock of available means to satirize and parody said content would likewise be thin."

But the president of Onion Inc., the company under which both The Onion and ClickHole operate, doesn't believe that'll be a problem. He told AskMen there will always be material because "the world keeps evolving" and, more importantly, people keep doing stupid stuff.