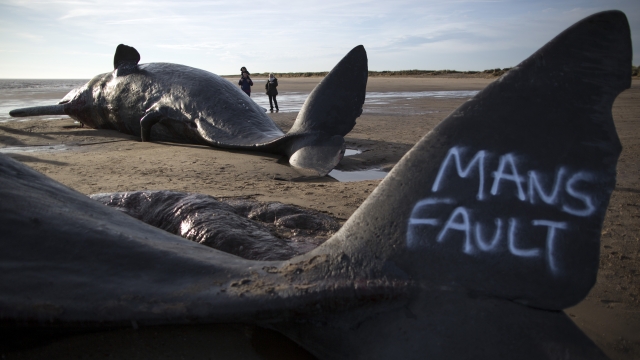 Our oceans are noisy. The movement of ships, pinging of sonar and whir of propellers are a near constant wherever man is.

And that has a big affect on ocean life, especially mammals like whales and dolphins that use sound to communicate, move around and locate food.

For one, man-made sonar disrupts whale behavior. A 2008 study found that some whale species stop "vocalizing and foraging for food" around sonar. And that can lead to starvation and death.

Sonar can hurt whales in other ways. It can make them flee and beach themselves. Some species are affected by sonar more than others. Even blue whales — one of the largest animals we know of — will flee from sonar.

Because sonar can harm marine mammals, the U.S. Navy has — in 2015 and 2016 — limited sonar testing and lowered sonar levels.

There's other noise pollution. Loud noises, like boat propellers or blasting for oil wells, make whales dive frantically, which can give them the bends, a condition where nitrogen bubbles form in the tissue. This can kill them.

And while law says animals can't be exposed to sounds louder than 180 decibels, noise carries farther underwater. Whales up to 124 miles away might respond to those noises.

This video includes clips from the U.S. Navy, BBC, enneadin / CC BY 3.0, GoPro, National Geographic and NTDTV and images from Getty Images.