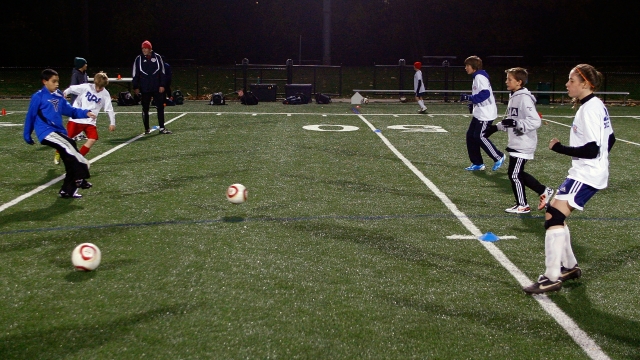 SMS
Soccer's Popularity Increased — And So Did The Rate Of Injury For Kids
By Samantha Crook
By Samantha Crook
September 12, 2016
A new study specifically called out the practice of hitting the ball with your head — or heading — as one behavior that can put kids at risk.
SHOW TRANSCRIPT

"I don't remember much, but what I've been told is I was coming out to get a ball, and my own teammate's knee collided with my head," a soccer player said in a Nationwide Children's Hospital video.

According to U.S. Youth Soccer, about 3 million people under age 19 play in leagues annually. And the rate of injuries has climbed with soccer's increased popularity, according to a new study.

The study published in the journal Pediatrics reports the rate of head injuries alone increased by almost 1,600 percent for children between ages 7 and 17.

The study used soccer participation data and emergency room data from 1990 to 2014.

But the study points out its findings are limited because it didn't account for untreated cases and cases treated outside of emergency rooms.

One of the study's authors said: "We're seeing athletes play year-round now thanks to club, travel and rec leagues, and the intensity of play is higher than it ever has been. These factors combine to lead to more risk of injury."

The study specifically called out the practice of hitting the ball with your head — or heading — as one behavior that can put kids at risk.

Last year, U.S. Soccer issued recommendations to ban heading for kids under 10 and limit it for kids ages 11 to 13.