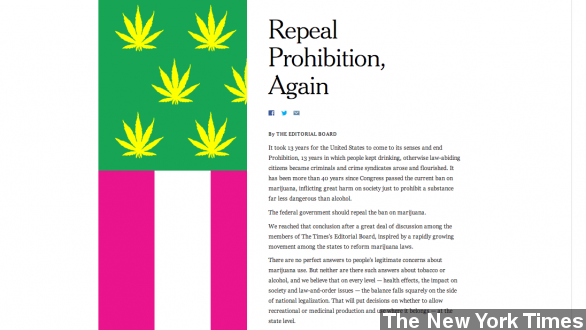 By Sebastian Martinez
July 27, 2014
The New York Times has officially endorsed the legalization of marijuana, but why now, and to what end?
SHOW TRANSCRIPT

The New York Times says it's "High Time" the U.S. legalized marijuana and, despite the pun, it's taking the issue seriously. (Via Getty Images)

In an official endorsement, published online Saturday and in print Sunday, the 18-member editorial board of the Times called on the federal government to repeal its ban on pot.  (Via The New York Times)

The main sticking points of the endorsement were that it should be up to states to decide their own marijuana laws; that the plant is less dangerous than alcohol and tobacco; and that it should be limited to those 21 and older.

The Times also pointed to the issue of a disproportionate amount of young black men being arrested for marijuana-related crimes.

As Vox points out, black men had nearly four times the arrest rate as white men in 2010 for marijuana-related crimes, despite evidence showing both demographics have similar rates of drug use. (Via Vox)

In an interview with Politico, Times editorial page editor Andrew Rosenthal said there was some disagreement before the endorsement. "We had an interesting debate on three approaches: let Washington do the wait-and-see thing it has been doing; decriminalization, and outright repeal of the law against marijuana."

In terms of timing, the paper decided to publish its endorsement now, because of growing support for legalization, with the state of New York legalizing marijuana for medical use in July. (Via New York State)

New York brings the tally of states that have some form of legalized marijuana up to 23, although Colorado and Washington are still the only states where recreational use is legal. (Via KMGH)

And the Times' decision to come out in support of legalization has been met with praise —a little predictably— from certain sectors.

The "High Time" series of articles the Times plans on publishing over the next week got support from the pro-pot newspaper High Times, which wrote, "This is sure to be a turning point in the mainstream media's relationship with pot." (Via High Times)

The Huffington Post echoed that sentiment arguing, "Given the Times influence, it could be that the endorsement of federal legalization of marijuana could spur politicians, organizations and publications to do in kind."

The Times plans on publishing articles from the members of the editorial board over the week following Saturday's endorsement, starting Sunday with an article on states' rights.