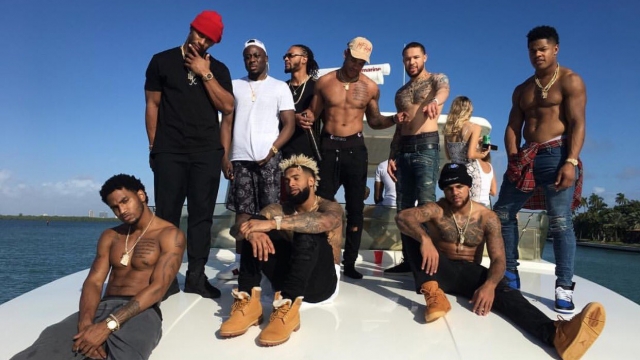 SMS
The New York Giants Aren't Worried About Their Receivers' Miami Trip
By Grant Suneson
By Grant Suneson
January 3, 2017
After photos showed Giants players partying in Miami on an off day, their team said it wasn't a big deal.
SHOW TRANSCRIPT

With less than a week to go until the start of the NFL playoffs, some New York Giants players are getting ready for their upcoming game a bit differently than most other teams.

This photo, which Victor Cruz posted then deleted on Instagram, shows some of New York's wide receivers hanging out on a boat in Miami during an off day.

Cruz, Odell Beckham Jr., Roger Lewis and Sterling Shepard all reportedly went out to a Miami nightclub and partied with the likes of Justin Bieber, 2 Chainz, Trey Songz and others.

"When I saw some of the pictures, I was a little disappointed just because they obviously didn't pack accordingly. They didn't have any shirts. …  I was telling people I took the picture. They wouldn't let me in with my shirt off," Manning said when media asked him about the party photos.

Athletes with a big game coming up often have their every move scrutinized, and the Giants took criticism from the sources you would expect.

"This was a really, really bad idea starting with Odell Beckham and all the diva receivers on the New York football Giants," Skip Bayless said on "Undisputed" on Fox Sports 1.

But within the Giants locker room, no one seemed to have an issue with it. Giants head coach Ben McAdoo said: "The players are off. They're not working."

Beckham also defended the trip, promising to be ready in time for the game. If this Instagram video is any indication, he's not too worried about the criticism.