The XFL Gets Another Shot, Will Return In 2020 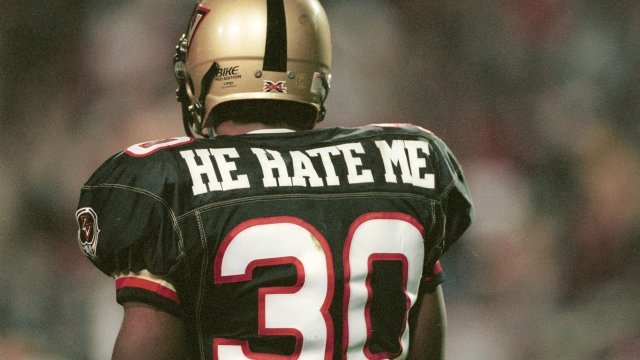 SMS
The XFL Gets Another Shot, Will Return In 2020
By Austin Kim
By Austin Kim
January 25, 2018
The XFL is officially coming back. WWE Chairman Vince McMahon announced he's relaunching the league in 2020.
SHOW TRANSCRIPT

The league that brought us "He Hate Me," "Baby Boy" and a more violence-driven game is coming back. The XFL will return in 2020 after its lone season in 2001.

"We're going to give the game of football back to fans," WWE Chairman and CEO Vince McMahon said in a news conference."It is football reimagined. Since we're launching in 2020, we have two years to really get it right."

For one, McMahon said this will be family-friendly. There will no cheerleaders and McMahon promised there will not be political activism. If a player has an arrest record, McMahon pledged that player will not play in the league.

So that means, if McMahon stands firm, someone like former Texas A&M star Johnny Manziel would not play. But it could give athletes like Tim Tebow or even Colin Kaepernick an opportunity to play.

The decision to start a new professional football league now might seem perplexing. Football, on all levels, is trying to address concerns over concussions and player safety.

But perhaps the WWE mogul senses an opportunity. The Arena Football League had several teams fold. The NFL is facing declining viewership and still feeling the fallout over the player protests during the national anthem. And McMahon vowed to consult medical experts as he restarts the league.

The XFL will relaunch with eight teams playing a 10-game schedule. It remains unclear which cities will get an XFL team.

One more thing: This time around, there will not be any crossover between the league and WWE. So for those looking for John Cena or The Undertaker in football pads, you better look elsewhere.