The New Rand Paul: No Dove On Foreign Policy 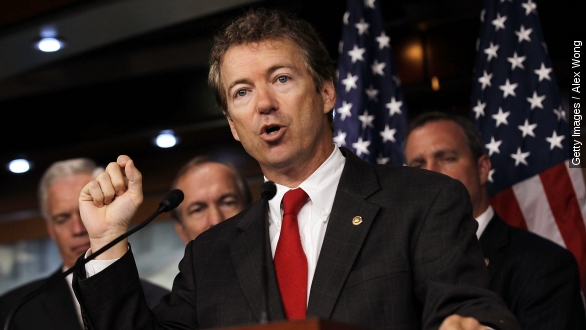 How did Rand Paul go from this?

"Military. Would you cut the military?" ABC's Christiane Amanpour asked.

For almost all his time on the national political scene, Senator Rand Paul has had a foreign policy very different from his fellow Republicans.

"He doesn't know what he's talking about," Marco Rubio said.

But now, he’s running for president. And he wants the nomination of a party that is getting more and more hawkish on foreign policy. Today’s Republicans are not the war-weary Republicans that we saw even a few years ago.

That’s largely because of ISIS and other jihadi groups across the Middle East.

And Paul’s supporters say the spread of those groups is why he’s changed his own thinking. Last month he proposed a $190 billion boost for the Pentagon over the next two years.

His policy shift isn’t just about ISIS. Paul was one of 47 Republican senators who, in March, signed a letter to Iran's leaders meant to undermine the Obama administration in ongoing nuclear negotiations.

Despite saying this for years.

"I would like to bring them to the negotiating table, and it appears that the sanctions are working," Paul said. "I think it's a good sign that we are in negotiations."

But that was the old Rand. The new Rand has campaign ads that say things like this.

This video includes images from Getty Images and music from Magu the Dog / CC BY NC SA 3.0