The New Home For The Ringling Bros. Elephants Might Not Be So Great 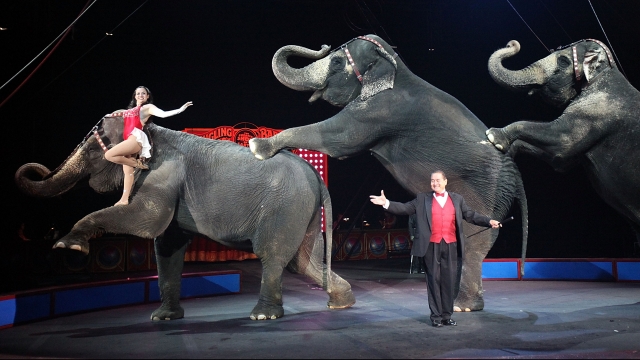 SMS
The New Home For The Ringling Bros. Elephants Might Not Be So Great

By Cody LaGrow
May 2, 2016
The 13 remaining performance elephants will move to a 200-acre facility in Polk City, Florida.
SHOW TRANSCRIPT

The show's over, and trunks are packed. The Ringling Bros. and Barnum & Bailey Circus officially retired their elephants.

It's the end of a contested 145-year era. Animal rights groups have often criticized the company's use of elephants.

"We were going to transition all of the elephants on our three Ringling Bros. touring units to the Center for Elephant Conservation. ... It's a 200-acres, working facility that was designed, and to this day, still is, specifically for the care of these magnificent animals," Stephen Payne, VP of corporate communications at Feld Entertainment, shared with National Geographic.

Like many retirees, the remaining 13 friendly giants are headed to Florida to live on a company-owned conservation, but some say the conditions there are a circus in itself.

National Geographic toured the facility last year and described Ringling's setup as "flat and treeless" where elephants may be "penned" for a day and "tethered with an ankle chain at night" to prevent them from stealing one another's meals.

Ed Stewart, president of Performing Animal Welfare Society, said: "They are missing the most important experience, which is freedom in the wild. It's like keeping a Ferrari in the garage."

This video includes clips from the Ringling Bros. and Barnum & Bailey Circus and images from Getty Images.