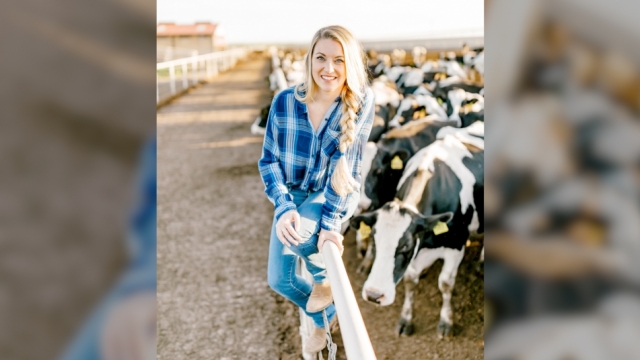 Life on an American dairy farm: The cows are quiet and curious, there's plenty of space to roam. Surprisingly, there's no pungent smell. And the face of this farm might shatter some stereotypes about who the typical farmer is.

Tara Vander Dussen is a fifth-generation dairy farmer with roots tracing back to a dairy farm in the Netherlands. She has a social reach of more than 50,000 followers on Instagram and Facebook.

"My tag line right now in my bio is "Breaking barriers for women, dairy and sustainability," she said.

She's part of a family-run operation, like 98% of farms in the U.S. Her role focuses on the environmental sustainability of the dairy. It's critical work in drought-stricken New Mexico as the climate crisis worsens and demand for food grows.

Vander Dussen is just one of more than 1 million female producers in the U.S., driving $148 billion in agriculture sales, according to the U.S. Census of Agriculture.

The census also found that more women are entering the agriculture industry and playing a role in many decisions. It can be anything from land use to what type crops are being planted to even keeping the financial records in check.

"I love that women are getting more recognition no matter what their role is," Vander Dussen said. "We all have unique roles on our farm, whether it's driving the tractor or feeding the kids or taking meals out to the harvest crew. Everyone has their role."

Vander Dussen helped create a system where every gallon of water on the dairy is used four to five times.

She's shared this journey with her followers on Instagram and debunked misconceptions about the dairy industry. But some women find they have to sift through some sexist manure.

"One time my husband actually was approached by a person who was selling something that had to do with the environmental side of things like our lagoon management," Vander Dussen said. "And my husband said, 'I'm sorry, I don't deal with that. That's actually not my area. My wife would be the person to talk to you. And then if she wants to bring it up with the rest of the family, if we want to implement it, she will.' And he said, 'No, no, no, I want to talk to you.'"

Despite some setbacks, she says the needle is moving toward gender equality.

Vander Dussen hopes to inspire her daughters, especially her eldest who at least for now says she wants to be a vet for a dairy farm.

"I just hope that she doesn't face some of the sexism that I have faced," Vander Dussen said. "And I think that's probably a hope of lots of moms — you know, girl moms — you hope for things to be a little bit better, like leave it in a better spot than the way you got it."

Experts say that may be another reason behind the growth of women in agriculture — interest in drawing connections to the communities they serve.

"My hope for the future is, truly, that no matter what your role is in agriculture, what path you choose, you get to choose the path you want as a woman," Vander Dussen said.

And that path is changing the face of American agriculture.