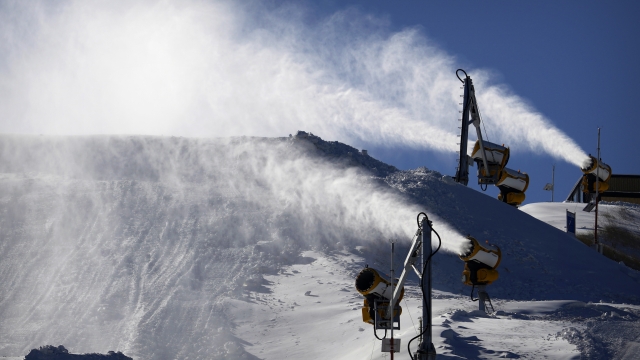 SMS
The Negative Impact Of Snowmaking Machines
By Scott Withers
By Scott Withers
January 25, 2022
The demand for artificial snow is rising, but climatologists say the impact on the environment isn't viable long-term.

Ski vacation season is in full swing and the Rocky Mountains are covered with both real and artificial snow. But it's the fake stuff that's taking a negative toll on the climate.

The process is referred to as a scientific feedback loop. The machines use a lot of energy from power plants and fossil fuels to pump out manufactured snow.

Snowpack in the Western U.S. has dropped 20% because of drought and climate change, which means even more artificial snow is needed to keep slopes open.

Snowmaking machines have become more environmentally friendly — like automatically shutting down when temperatures get too warm — but climatologists say the machines are just a bandage.

Even with environmentally friendly snow machines, climatologists predict Colorado's ski industry won't be viable beyond the year 2050 due to climate change.

There will also be a lot of fake snow in China as the country prepares for the Beijing Winter Olympics.

The communist country has done this in the past to generate more rain and push out air pollution just before major events.

As for the snow on the ski slopes in China — almost all of it is manufactured. The country is turning millions of gallons of water into snow, requiring more power from coal plants, generating more air pollution and requiring more rockets to drive that pollution out.

It's one big negative feedback loop.