The Navy Paid 1 Cent To Get Rid Of This Ship 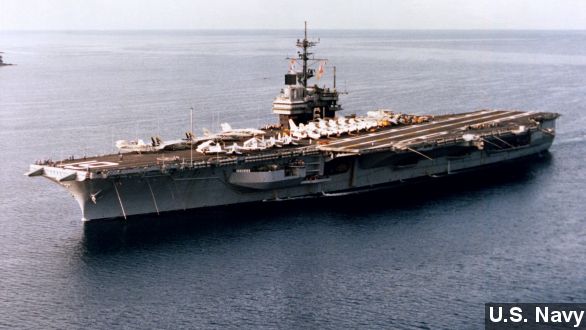 One penny. That’s how much the Navy paid to part with this aircraft carrier.

The USS Ranger will soon make its final journey — from Bremerton, Washington where it’s docked to International Shipbreaking’s facility in Brownsville, Texas. (Via YouTube / silentotto)

The company is getting paid exactly one cent to break the carrier into parts and recycle the material — clearly, a symbolic financial arrangement. The company is paying for the towing costs but makes its real money when it goes to sell the scrap.

Commissioned in 1957, the Ranger was in service nearly 36 years and played a big role in both the Vietnam and Gulf Wars. (Video via YouTube / John Adams)

Though you may know it best as the carrier featured in films like “Top Gun” and “Star Trek IV.”

There was an effort to turn the Ranger into a museum to be docked in the Pacific Northwest.

But a Navy spokesperson told Fox News the group behind the effort never raised the $35 million needed to save the historic aircraft carrier.

And because the Navy can’t hang on to inactive ships indefinitely, the Ranger was eventually slated for dismantling.

This is actually the fourth carrier the Navy’s gotten rid of in recent years, and the third scrapped for only a penny. (Video via WPRI)

The Ranger is too big to squeeze through the Panama Canal, which means it will have to go around South America on its way to Texas. The trip is expected to take around five months and will begin in early 2015.

This video includes images from the U.S. Navy and Jelson / CC BY SA 3.0 and music from Chris Zabriskie / CC BY 4.0.