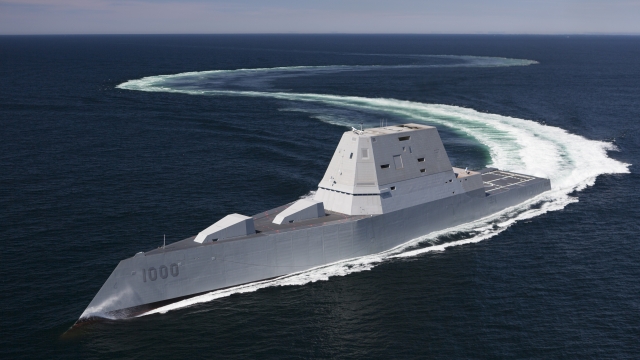 The Navy just got its most advanced ship yet. You're looking at the DDG-1000, a 610-foot destroyer. The Navy calls it "the most technically complex" ship ever. And it should be — it took more than 20 years of planning.

The ship's design makes it more difficult for enemy radar to detect, and they likely don't want to be on the receiving end of the ship's wrath. It can fire long-range projectiles up to 63 nautical miles. It also has 80 launch cells for Tomahawk missiles, two other kinds of missiles and anti-submarine rockets.

General Dynamics, the contractor that built the ship, is building two more. The total cost is expected to be about $22.5 billion. The Navy initially planned to build a total of 32 destroyers but cut down its order to three.

The ship houses a 143-person crew and will be based in San Diego.

And it will soon be known as the USS Zumwalt to honor the Navy's 19th Chief of Naval Operations Admiral Elmo "Bud" Zumwalt Jr.

The ship will be commissioned on Oct. 15 in Baltimore.

This video includes a clip from the U.S. Navy and General Dynamics Bath Iron Works.