The National Spelling Bee Words Are Getting Harder Every Year 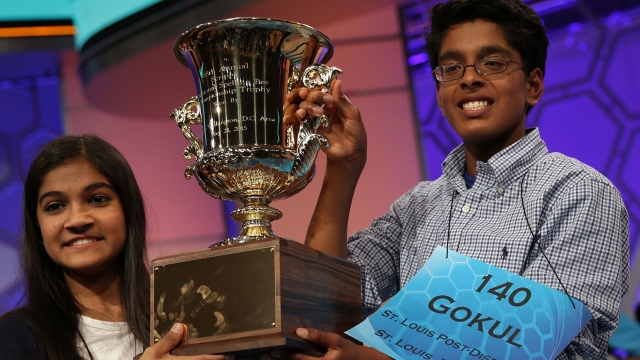 I noticed some of the words are a little different than others. Like in 1932 — knack, 1935 — intelligible, 1956 — condominium, that was the winning word. Fast-forward to today, and the winning words — I can't even pronounce them. I'm going to try to just so you can get a sense, but we've got scherenschnitte, I'm guessing, nunatak, before that, stichomythia, feuilleton.

So, to me, I'm looking at these, it looks like these words have gotten a lot harder to spell. So we're going to actually ask the national director of the Scripps Spelling Bee. Her name is Paige Kimble. She actually won in 1981; she was the national champion, which means she won with the word sarcophagus. So we're going to ask her, is it in my head? Or have these words gotten a lot harder?

"The bee's become much more difficult, and it's a good news story for the nation, and here's why. It's because all the great words that we think of as good spelling bee words like onomatopoeia and camouflage and sophomore, those types of words are now the domain of regional spelling bee. So all the kids are learning those great words, but they are what challenge kids at the local bee level and so by the time they get here, we're dealing with the top one millionth of 1 percent of all the kids who participated in spelling bees this year, so you can only imagine the level of difficulty we have to offer to challenge them."

The kids know the words are getting harder. One kid's grandpa even competed in the 1955 national bee, and we asked what he thinks of today's bee.

"I think he says they're harder, definitely harder. And the bee was much smaller. It wasn't as televised, or it wasn't as much of a thing back then as it is now," Cooper Komatsu said.

This year, the words are actually going to be even harder. The past two years ended in ties, so Scripps tweaked the rules, partially in the hopes of having just one winner. Instead of a predetermined set of 25 championship words, the judges will have more flexibility to pick more challenging words in the finals.

If the pattern continues, the words will keep getting harder and harder.

This video includes images from Getty Images and clips from The American Bazaar, ESPN and WCNY. Newsy is a subsidiary of the E.W. Scripps Company. Music provided courtesy of APM Music.