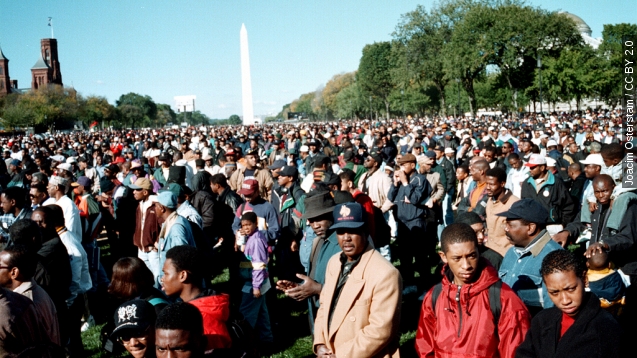 Some speakers at the 20th anniversary of the Million Man March invoked a familiar refrain Saturday.

"We came to tell the whole world that black life matters to us," Nation of Islam minister Nuri Muhammad said.

This year's theme was "Justice or Else" and that went beyond concerns for black lives.

The event, which is touted as one of the largest gatherings of black Americans, has been taking place at Washington, D.C.'s National Mall since 1995. Back then, Nation of Islam leader Louis Farrakhan — who inspired the march — spoke directly to black men about "atonement, reconciliation and responsibility." (Video via NBC)

The Nation of Islam framed the inaugural event like this, "The world saw black men demonstrating the willingness to shoulder the responsibility of improving themselves and the community" — which was, at the time, revolutionary.

But there's an understated inclusivity in the march. Ostensibly, it's still a gathering of black Americans. At the end of the day, though, it is and has always been a platform for change.

"We're trying to show the world these are problems here and these problems demand resolution," Farrakhan said.