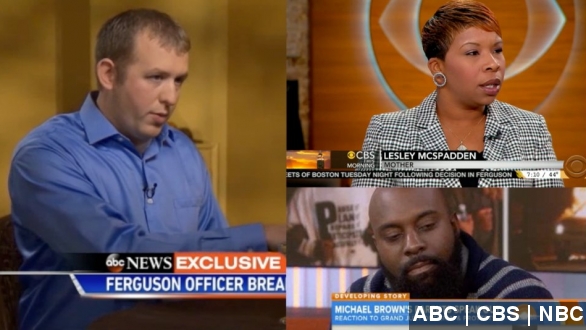 SMS
The Michael Brown 'Hands Up' Debate Continues
By Jake Godin
By Jake Godin
November 26, 2014
The grand jury has ruled not to indict officer Darren Wilson, but that doesn't mean an end to the fight over who was telling the truth.
SHOW TRANSCRIPT

It's been the rallying cry across the nation for Michael Brown supporters ever since the unarmed black teenager was shot and killed by a white Ferguson police officer in August.

"Hands up, don't shoot," a crowd of protesters chants in this video uploaded to YouTube.

Wilson replies, "That would be uncorrect. Incorrect."

When asked on NBC's "Today" show Wednesday what he thought of Wilson's side of the story, Brown's father found it unbelievable.

Michael Brown Sr. said: "No. For one, my son wouldn't. ... He respected law enforcement. Two, who in their right mind would charge a police officer that has his gun?"

Brown's mother gave a similar response on "CBS This Morning."

Whether Brown had his hands up is one of the many contentious questions surrounding the story of his shooting.

Witnesses such as Brown's friend Dorian Johnson, who was with him the day of the shooting, believe they saw Brown put his hands up as if to surrender before being killed.

"I saw my friend stop and put his hands up, being compliant after being fired upon, after already being struck with a bullet wound from officer Darren Wilson's gun," Johnson told CNN.

There are contradictory accounts from about 60 witnesses officially recorded in these thousands of pages of grand jury court documents. Some say Brown had his hands up. Some say they weren't sure. And some agreed with Wilson's side of the story.

It's that wealth of information some are saying led to a questionable grand jury process — "too much evidence and not enough supervision," as Vox puts it.