The Mental Health Toll Of Being Undocumented 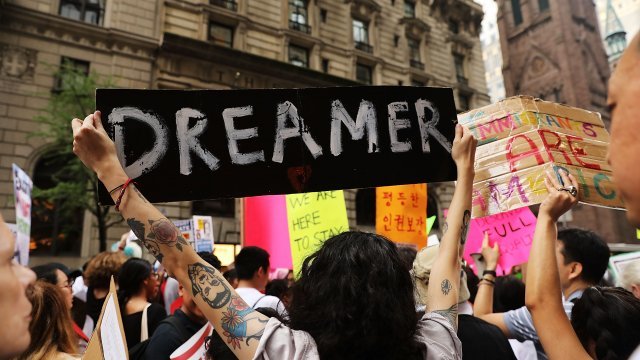 SMS
The Mental Health Toll Of Being Undocumented
By Ben Schamisso
By Ben Schamisso
March 5, 2018
DACA recipient Egle Malinauskaite hopes to break down stigmas associated with being undocumented and having mental illness by being open about both.
SHOW TRANSCRIPT

"That's why I'm here today, opening up about being undocumented and being someone who people don't assume is undocumented," Malinauskaite said.

"I know that as a white undocumented person, I am not immediately the target of law enforcement or ICE, but knowing that people in my community are, and knowing that every time that I organize or fight back against this system, I'm putting myself more in a position to be targeted, it is scary," Malinauskaite said.

Malinauskaite has been extremely vocal about the mental health cost immigrants pay for living in fear of deportation.

"I was talking to people all over Illinois and every time I was in front of a group of people, I was sharing my story of being undocumented. What's to say that someone in the audience or someone in the general area could be an ICE agent, be friend with an ICE agent, and just like tip them off," Malinauskaite said.

"When I'm organizing or I'm at a protest and I'm surrounded by my comrades and by the people I know will be there for me, I feel safer. But, when I'm just living my life and kind of navigating the world and I'm alone, that's when the paranoia creeps in," Malinauskaite added.

Malinauskaite said the paranoia got out of hand last summer when news about ICE raids and deportations surged.

"I would be driving on the highway for example, and I'd be listening to the radio and I felt like the radio was singing to me and when I looked down the billboards and just like all around me, I thought I was getting messages that my life was in danger, that I was a danger to myself, maybe to other people and it terrified me, because I felt like I was being spoken to by some kind of force," Malinauskaite said.

"And eventually, I was in a position to call an ambulance on myself because ... I mean, I had completely lost touch with reality. And I end up in this private hospital out in the suburbs and I'm in a nightgown. The security had to throw me down into a bed and pin me down and put a spit bag over my head and I had to be sedated. I was like singing Disney tunes and just yelling at the top of my lungs," Malinauskaite said.

"I was diagnosed with general anxiety disorder and then PTSD and I was given medication. And I think I was happy that I could put a name to what I was experiencing. Since then, I've just been trying to be as honest with my experiences with people as possible because I know that mental health is so stigmatized," Malinauskaite said.

While harsh immigration policies are not the only factors behind the distress that Malinauskaite and many undocumented immigrants live with, they can make things worse.

"Many immigrants fled their country of origin due to traumatic events, experienced trauma on their journey here and then are resettled in communities with high rate of community violence and other sorts of traumatic experiences," said Rebecca Ford-Paz, the attending clinical child psychologist at Ann & Robert H. Lurie Children's Hospital of Chicago. "So, to layer on socio-political rhetoric is just yet another level of trauma for them," she added.

A recent Rice University study found that nearly a quarter of undocumented Mexican immigrants residing near the California–Mexico border are at risk of mental disorders, particularly depression, panic and anxiety. These numbers are considerably higher than those of the general U.S. population.

The author of the study told the Pacific Standard that so-called Dreamers are especially vulnerable because of what she called "self-identity conflict." She said: "They understand that, regardless of having an education and mastering the language, and almost being like their U.S.-born counterparts, they are not. So they continue to be not second-class citizens, but third-class citizens. At some point, there's no hope for them."

"We need to make sure that people know that it's not out of the ordinary to be experiencing distress in this climate. They don't have to continue to feel like they need to shoulder that burden on their own," Ford-Paz said. "And then simple things, letting people know that you are aware that this can be a stressful time and that you are safe person that they can talk to and being there to listened, labeling their emotions, validating their emotions and being careful not to dismiss their experience because their fear are real," she added.

Malinauskaite said: "Within our own circle, we talk about mental health, we talk a lot about self-care and making sure that we do take time for ourselves and breath a bit. In most interviews with undocumented people, or like when we see us portrayed in the media, the conversation is always on the fact of 'are they human or deserving of rights?' I don't think that it ever even gets to the point of mental health."

"This is why it's important to talk about this issue because it just further shows people that I'm not my citizenship status. I'm a complete, fully formed human with different experiences and different facets of myself and that includes mental health," Malinauskaite added.