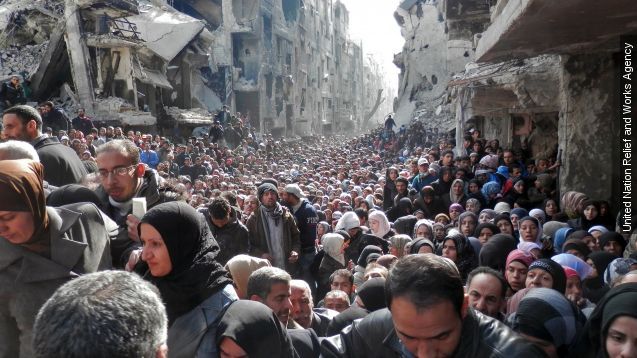 SMS
The Medieval Tactic That's Starving Civilians In Syria
By Jake Godin
By Jake Godin
January 9, 2016
Syrians are starving in their own cities. Madaya is one example, but there are similar cases throughout Syria. And all sides are responsible.
SHOW TRANSCRIPT

Syrians are starving in Madaya.

The city has been under siege by the Syrian regime and Hezbollah for months, and no people or supplies can get in or out of the city.

But Madaya is far from being the only besieged city in Syria. (Video via World Food Program)

Zabadani, a city near Madaya, still has about 500 people trapped in it, according to the United Nations. That's despite a ceasefire agreement both sides signed in October.

An estimated 177,000 people in a cluster of cities east of Syria's capital, Damascus, are under siege by regime forces.

Suburbs of Damascus, like Yarmouk or Daraya, are also encircled by the regime and receive only intermittent aid.

But the regime isn't the only force trying to starving a city's population.

Foah and Kafarya are surrounded by rebels in the country's north. One group is Jabhat al-Nusra, Al-Qaeda's Syrian affiliate. The U.N. estimates there are 12,000 people trapped in both cities, though some have been evacuated recently.

ISIS has a siege as well, specifically the government-controlled city of Deir Ez-zor in Syria's east. The U.N. estimates 200,000 people are trapped there.

When it comes to weathering a siege, the Syrian regime has two big advantages over rebel groups: access and air power. (Video via Presidency of the Syrian Arab Republic)

Unlike the rebels, Syria's government has the ability to airlift supplies and soldiers to its besieged cities.

The regime also controls access for humanitarian aid groups. According to the latest U.N. report, the regime prevented seven convoys carrying humanitarian aid from reaching their destinations. Two convoys were held up by rebel groups.

Whatever the case may be, the victims are the same in each scenario: civilians who aren't getting enough food to survive.