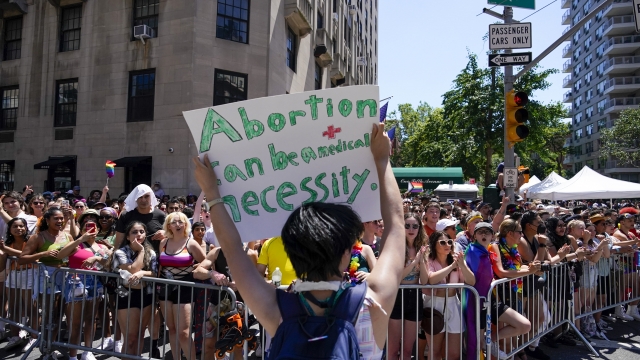 SMS
The Medical Effects of Abortion Bans
By Newsy Staff
By Newsy Staff
June 27, 2022
The overturning of Roe v. Wade will have risky ripple effects for the health of a woman during pregnancy and birth.

Protesters on both sides of the abortion debate took to the streets over the weekend after the Supreme Court handed down its ruling in Dobbs v. Jackson. It eliminated the federal right to abortion and gave states the power to decide the issue.

With abortion trigger laws on the books, 13 states are fast-tracking abortion bans. The laws have already taken effect in five of those states, with the rest expected to take effect within the next few months. Alabama – which did not have a trigger law — has also banned abortion.

Unless abortion-seekers in those states are able to travel elsewhere or access medication abortions, they will be forced to carry their pregnancies to term or seek out medically unsupervised abortions.

Abortion has long been treated as a culture war issue, but efforts to ban it can often overlook the medical aspects of the procedure.

Both pregnancy and birth are considered medical conditions, even so-called "normal" pregnancies are not risk-free.

Dr. Madeline Sutton, a board-certified OB/GYN in Atlanta and a former CDC researcher, told Newsy the U.S. ranks much lower than other industrialized countries when it comes to mortality, and the numbers can differ widely along racial and regional lines. More than 55 Black women die per every 100,000 live births, nearly three times the rate for White women. Data from states that report racial and ethnic splits on abortion shows that Black women seek out abortion at higher rates.

Some Southern states with strict abortion laws have some of the highest maternal mortality rates in the nation. In Louisiana, where the governor signed a bill in June to strengthen the state’s abortion trigger law and criminalize providing an abortion, the maternal mortality rate has climbed as high as 77 deaths per 100,000 live births in the last few years.

In Georgia, that rate is 66 per 100,000, and the state is in court fighting to implement a ban on abortions after six weeks of pregnancy — before most people even know they are pregnant.

And with abortion no longer an option in the states where it's been banned, are  there more resources available instead for people who do carry pregnancies to term?

Well, out of the 13 states with abortion trigger laws on the books, none of them require paid family leave for pregnant people who give birth, meaning that those who rely on their employer for insurance coverage could lose health care access if they need time off after giving birth.

As for affordable health care, it’s a mixed bag. Eight states with trigger laws have expanded Medicaid access, while five — Mississippi, South Dakota, Tennessee, Texas and Wyoming — have not.

Even people who have access to care and want to carry their pregnancies to term could be negatively affected by certain abortion bans.

Take ectopic pregnancies as an example. These occur when a sperm fertilizes an egg, but the egg grows outside the uterus, instead of inside it. The March of Dimes estimates that about 2% of pregnancies are ectopic, and in all of those cases, it is impossible for the fetus to survive. Amy Alspaugh, a certified nurse-midwife with a doctoral degree in nursing and an assistant professor at the University of Tennessee, told Newsy it can also be fatal to the pregnant person, without treatment.

"If an ectopic pregnancy ruptures, it basically kind of burst the uterine tube open and causes an immense amount of bleeding in the peritoneal cavity, so in the abdomen," Alspaugh said. "And so people can actually die of an ectopic pregnancy. It's a leading cause of death in the first trimester for pregnant people, so it is serious."

Many abortion bans have exceptions for times where the pregnancy jeopardizes the life of a pregnant person, like ectopic pregnancies. As a reminder, there are a range of physical complications that can come with pregnancy, for both the development of the fetus and the person carrying.

But that’s been a target for politicians opposing abortion access. Oklahoma passed a near-total abortion ban with an exception for ectopic pregnancies, but during debate about the bill, Republican state Sen. Warren Hamilton voiced his opposition to that exception.

"When a child who is, in fact, living out part of his or her early life as a, as the unfortunate circumstance of being an ectopic pregnancy, it is in fact still a unique human being with its own DNA, and I wonder – I guess I just don’t understand why we’ve created an exception where we allow those children to be murdered but not the others," said Sen. Hamilton.

Although that effort to target exceptions for ectopic pregnancies didn’t succeed, many abortion bans as currently written could create uncertainty for doctors and other care providers.

"If, for example, they were to say you couldn't do anything once either fertilization or implantation has happened, which both have already occurred, by the time you have an ectopic pregnancy, then you're going to tie clinicians' hands in terms of how they can treat this life-threatening condition that people don't usually die of in the United States," Alspaugh said.