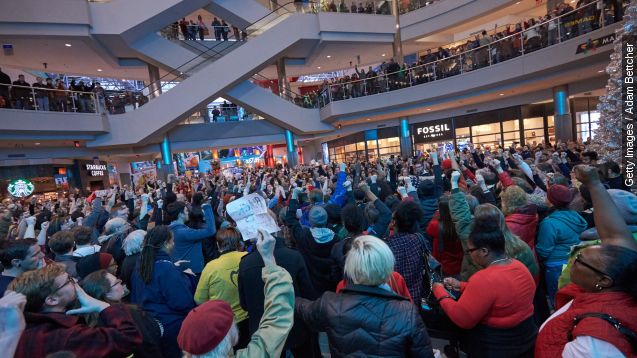 SMS
The Mall Of America Wants To Keep Out Black Lives Matter Protesters
By Katie Link
By Katie Link
December 21, 2015
Retailers at the Mall of America may have more to worry about than meeting sales goals this week.
SHOW TRANSCRIPT

Authorities at the Mall of America in Minnesota are taking legal action to try to ensure history doesn't repeat itself.

This year, the group is gearing up to do it again. This time, the date is set for Dec. 23.

The motivation for this year's protest? To make authorities release video of the death of Jamar Clark, who was fatally shot by Minneapolis police back in November.

But attorneys for the Mall of America filed restraining orders against eight members of the Black Lives Matter group to try to thwart their mission.

According to KARE, the court documents stress that the mall is a private center that prohibits "all forms of protest, demonstration and public debate." The documents also ask leaders of the protest to take down social media posts encouraging people to participate.

But it seems the social media posts just ramped up after the documents were filed. A Facebook post on the Black Lives Matter Minneapolis page reads in part, "The Mall of America has now taken the further outrageous and totalitarian step of attempting to control the speech of individuals."

But according to KSTP, the judge who ultimately dismissed charges against several protesters from last year's demonstrations said that a private property owner could seek a court order to stop an event like this.

A court hearing on the temporary restraining orders against Black Lives Matter organizers wrapped up Monday afternoon. Reports indicate a judge did not make an immediate decision on whether to block the protest from happening.