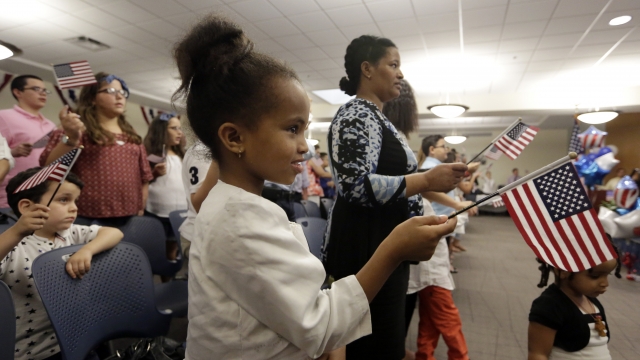 SMS
The Makeup Of Black People In America Is Starting To Look Different
By Newsy Staff
By Newsy Staff
March 8, 2022
Immigrants are making up a fast-growing share of Black Americans, after often being overlooked in the immigrant experience.

There's a shift happening with the Black population here in the U.S. — the makeup of Black people in America is looking different.

After centuries where most Black Americans could trace their American roots back hundreds of years, immigrants are making up a fast-growing share of the Black population in the U.S.

The Pew Research Center estimates that the Black immigrant population in the U.S. has surged in recent decades, from about 800,000 in 1980 to 4.6 million now. By 2060, it’s expected to grow to 9.5 million. The study also found that 1 in 10 Black Americans were born outside the United States.

Black immigrant households are more likely to be college-educated, have higher median incomes and a lower rate of poverty, but the Pew study also found they’re just as likely to deal with discrimination and racism.

But Black immigrants have often been overlooked in the immigrant experience because until recently, it was hard for them to immigrate here.

Let’s talk a bit about the history of Black immigration to the U.S.

It started with the slave trade, as hundreds of thousands of Africans were taken to the U.S. involuntarily between 1619 and 1808, when the U.S. outlawed importing people as slaves.

After that, there were more than 150 years where it was really difficult to get into the U.S. if you were Black or any other person of color, especially from anywhere outside North America, due to quotas that favored immigration from overwhelmingly white European countries.

More than 100,000 Black immigrants, mostly from the Caribbean, did make it to the U.S. in the early 20th century through Ellis Island and other U.S. ports, but an update to immigration laws in the 1920s heavily limited immigrants from anywhere outside Western Europe until 1965.

That year, Congress passed the Immigration and Nationality Act, which did away with the quota system and opened the door for an influx of migrants from Africa, Asia and Latin America.

Changes to the laws in the following decades also made it easier for refugees to enter the U.S., which helped increase immigration from countries that had civil wars, like the Democratic Republic of the Congo, Ethiopia and Eritrea.

And with more opportunities to enter the U.S., African countries are making up a larger share of Black immigrants.

While Pew’s study found that the Caribbean countries of Jamaica and Haiti sent the most Black immigrants to the U.S. in both 2000 and 2019, they make up a lower share in 2019 than they did at the start of the new millennium.

Meanwhile the share of immigrants coming from Africa has grown, with Nigeria and Ethiopia leading the way for African immigration to the U.S.