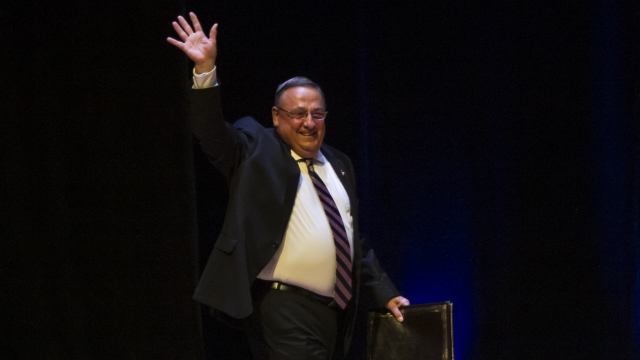 Maine Gov. Paul LePage left a state representative a profanity-laced voicemail — and then told the press about it.

"I would like to talk to you about your comments about my being a racist, you ----sucker. I want to talk to you. I want you to prove that I'm a racist," Gov. Paul LePage said in a voicemail to a Maine state representative.

It's not something you'd expect to hear from a governor, but that's just part of a profanity-laced voicemail Maine Gov. Paul LePage left for state Rep. Drew Gattine on Thursday.

Though Gattine denies he called LePage a racist, LePage might be used to being called one. He previously drew national attention for this comment he made in January.

"These are guys of the name D-Money, Smoothy, Shifty, these type of guys that come from Connecticut, New York. They come up here. They sell their heroin, and then they go home. Incidentally, half the time they impregnate a young, white girl before they leave," LePage said at a town hall event.

On Wednesday, LePage talked about his state's drug-dealing arrests during a town hall gathering. He said, "I will tell you that 90-plus percent of those pictures in my book, and it's a three-ring binder, are black and Hispanic people."

It seems the reason for the voicemail is based on hearsay.

During an encounter with reporters on Thursday, the governor apparently got the impression that Gattine had called him a racist. So he left Gattine a voicemail.

And that voicemail was made public thanks in part to the governor, himself.

Thanks to a tip from the governor — yes, he told reporters he left the profane voicemail — the Portland Press Herald filed a state open records request to get the voicemail from Gattine. It then posted the recording on its website.

During that sit down, he also said he wanted to challenge Gattine to a duel, saying he would point a gun "right between his eyes" if he could.

Maine's Democratic assistant House majority leader said the comments show LePage is unfit to hold office. She called on her colleagues across the aisle to help.

"We expect them to come together with us to either get him the help that he needs or to remove him from office," Rep. Sara Gideon said.

LePage has since apologized to the people of Maine but did not apologize to Gattine as of Saturday morning.

"He called me a racist, and in my mind, there is not a word in the English dictionary that I could repeat that is more hurtful," LePage said Friday.