The 2020 Supreme Court Case that Could Upend Abortion Lawsuits 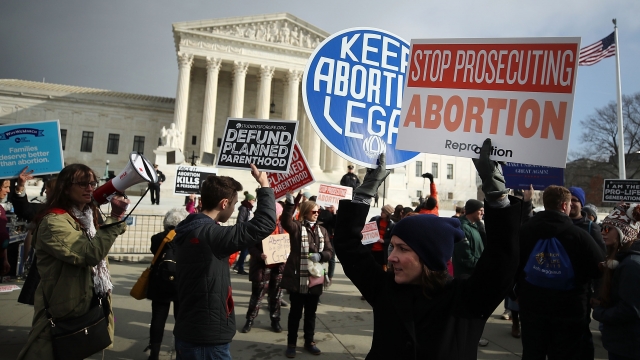 Groups on both sides of the abortion debate are poised for what could be the most consequential case in years.

March 4th is the day the Supreme Court will begin hearing arguments on the constitutionality of a Louisiana law that states any doctor performing an abortion must also have the right to admit patients at a nearby hospital. It’s known as admitting privileges.

The Court previously struck down a similar law from Texas in 2016 on the grounds that those requirements impose an "undue burden" on women seeking an abortion.

But anti-abortion advocates say their focus isn’t only on admitting rights. They aim to challenge the concept of third-party standing; the idea abortion facilities don’t have a right to sue in the first place.

“A basic rule of law that comes out of the Constitution is people can only file lawsuits asserting their own rights. I can’t go into court and file a lawsuit on behalf of someone else’s supposed injury or supposed rights. But what we have seen for years now is the abortion industry, usually Planned Parenthood, filing lawsuits.“

A change in standing rights could have a major impact on future abortion cases and force clinics to find an actual patient to file the lawsuit when laws like these pop up.

Louisiana, the state at the center of this case, has three abortion clinics. Newsy spoke to one of those facilities and asked why more of their doctors didn’t just obtain admitting rights.

“We’ve been at this for years, this happened several years ago when they first initiated this. The physician we had without privileges had approached a local hospital. It looked like because there was some work that physician could do for the hospital system that,  perhaps, privileges might be granted. However, that was rescinded due to political pressure.”

According to Kathaleen Pittman of Hope Medical Group, hospitals can deny admitting rights for any number of reasons, be it political or financial.

Still, the American College of Obstetricians and Gynecologists, who wrote an amicus brief in this case,  tell Newsy the Supreme Court has already spoken on this matter and the Texas precedent should prevail.

“It’s the same law. In 2016 the Supreme Court said that admitting privileges have no medical benefit. No benefit for women or for patients. They are an unnecessary, medically unjustified restriction on a woman’s ability to access abortion care.“

A ruling in this case has the ability to fire up the electorate on either side of the issue. A decision should come before the end of June. Which would put it right smack in the middle of the election season.