The Losers Of MLB's 2015 Offseason 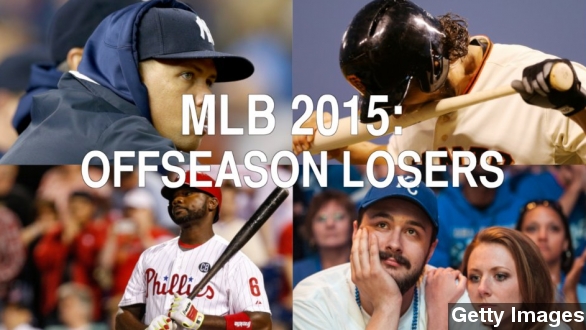 SMS
The Losers Of MLB's 2015 Offseason
By Matt Moreno
By Matt Moreno
February 16, 2015
The Philadelphia Phillies, Alex Rodriguez and both leagues' defending champions will have an interesting 2015 season.
SHOW TRANSCRIPT

Last week, we gave some fans good news — the winners of the 2015 MLB offseason.

This week, prepare yourself for the bad news.

The Phillies are ultimately on the list for not losing enough. They dealt shortstop Jimmy Rollins to the Dodgers at the beginning of the offseason but failed to get younger players or trade away big-money contracts.

Fox Sports' Ken Rosenthal writes: "What was the Phillies' apparent goal at the start of the offseason? To trade as many veterans and collect as much young talent as possible. The team is not anywhere close to accomplishing that mission."

They've been dangling Hamels around but either haven't had any takers or haven't liked what they've seen.

To the Yankees — things aren't getting any better for Alex Rodriguez. After sitting out all last year, he's without a guaranteed position in the Yankees lineup.

"If you say you can turn right and do the right thing or turn left and do the wrong thing, he always turns left. He's always got his left blinker on," said Dan Patrick.

"You can't stop him from being on the team unless you want to pay him to go home," CBS' Craig Carton said.

The team re-signed third baseman Chase Headley this offseason to man the corner, and the team's General Manager Brian Cashman has openly admitted he can't expect much from the soon-to-be 40-year-old Rodriguez.

Lastly, don't hold your breath on a classic World Series rematch in 2015. Both 2014 World Series teams — the San Francisco Giants and the Kansas City Royals — lost significant pieces over the offseason.

The "Underwhelming Winter" for the Royals means the AL Champs will venture into 2015 without James Shields, Billy Butler, Nori Aoki and more while the San Francisco Giants' Pablo Sandoval and Michael Morse are gone. (Video via NESN)

Plus, the team didn't do much of anything to shore up their rotation where Madison Bumgarner shouldered the majority of the work in 2014.

Worry not, though, Giants fans. History shows you might just be back into things next year.