The Lore Of Comic-Con's Hall H, Where Films Reveal Secrets 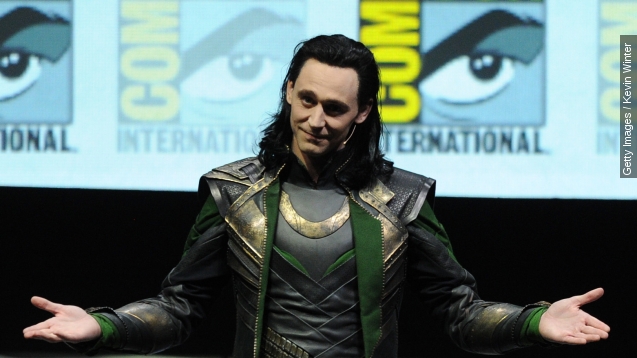 Hall H. Comic-Con's largest and most famous ballroom. It can hold up to 6,500 people and boasts some of the convention's most memorable panels.

But it wasn't always part of the convention.

When Comic-Con started in 1970, only about 300 people attended. Compare that to the 130,000 people who attend today and its $180 million economic impact, and you'll see how far it's come.

In order to accommodate its increasing popularity, Hall H was introduced in 2004, but 2006 was when Hall H became legendary.

"This is Sparta!" Gerard Butler screamed in the film "300." (Video via Warner Bros)

"300" director Zack Snyder debuted the first footage at the 2006 Comic-Con. The audience's reaction was so strong the trailer played two more times during the panel.

"Is it better to be feared? Or respected?" Robert Downey Jr. asked.

During the 2007 Paramount Pictures panel, Jon Favreau surprised the audience with the first look at the "Iron Man" trailer.

The unexpected trailer preview also marked a significant milestone in Hall H's history: the moment fans realized if you skipped a Hall H panel, you could be missing something big. And the big reveals weren't just for adaptations of graphic novels anymore.

Twihards represented a significant change in Comic-Con's fanbase when they flocked to "The Twilight Saga" panel. The inclusion of the teen vampire movie franchise helped bring the convention into the mainstream. (Video via Summit Entertainment)

And mainstream meant big-name cameos, and on-stage cast reveals became the headlines of the convention. (Video via Marvel)

"So thanks for having me," Garfield said.

"I am Loki," Tom Hiddleston said.

Other big panels to watch this year come from the 20th Century Fox and Lucasfilm camps.

20th Century Fox is slated to present the cast and first footage from "X-Men: Apocalypse," but we’re also betting on info about "Deadpool" and "Fantastic Four."

Lucasfilm will present "Star Wars: The Force Awakens" along with J.J. Abrams and "special guests."

This video includes images from Getty Images and music from Revolution Void / CC BY 3.0.