'The Lion King' Breaks A Record, But Reviews Aren't Roaring 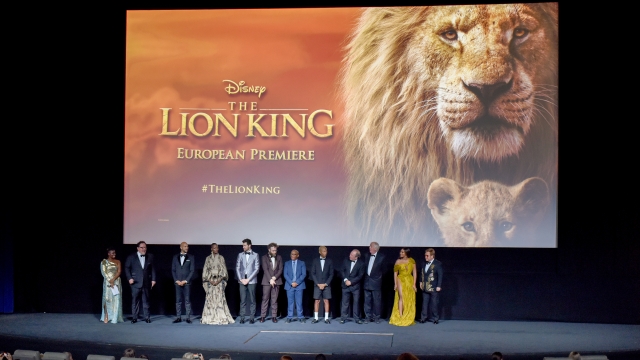 SMS
'The Lion King' Breaks A Record, But Reviews Aren't Roaring
By Lauren Magarino
By Lauren Magarino
July 22, 2019
The Disney remake raked in $185 million its opening weekend, but critics and movie-goers seem split on whether it holds up to the original.
SHOW TRANSCRIPT

"The Lion King" hit the big screen this weekend, and it's reigning over the box office.

Fans of the original 1994 movie and now a new generation came out to see it, and that's led the film to record-breaking status. Raking in $185 million, it saw the biggest July opening in history. The last film to hold that title?

"Only I can live forever," Voldemort said.

"Harry Potter and the Deathly Hallows - Part 2" back in 2011. The epic finale brought in a little over $169 million its opening weekend.

But the star-studded "Lion King" isn't a roaring hit with critics. It's sitting at just 53% on the Tomatometer.

Despite the reboot following the original pretty closely, some critics say this version lacks emotion — partly because the film's CGI is too realistic.

And while people don't want to do it ... even the queen, Beyoncé, is receiving some flack. Sports and culture site The Ringer conducted an exit survey about the movie on its own staff, asking them to finish the sentence, "Beyoncé was ...". One replied, quote "in this movie."

Even amid the mixed reviews, both critics and moviegoers have acknowledged an appreciation for the nostalgic story being shared with a new generation.

Holding on to second place, "Spider-Man: Far from Home" still has the box office in its web. It brought in $21 million in its third week.

And landing third on the box office is another Disney flick: "Toy Story 4." It came out on June 21.

Aside from giving us a plethora of unforgettable memes ... it pulled in $14.6 million dollars.

As for next week, Brad Pitt and Leonardo DiCaprio grace us with their presence in Quentin Tarantino's "Once Upon a Time in Hollywood."