Um, No Shame In Filler Words — They Can Give Sentences New Meaning 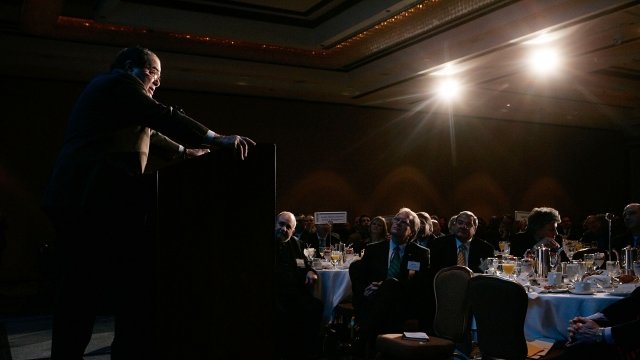 These words are fillers.  Like the inside of Twinkies ⏤ essential, albeit somewhat mysterious in nature. Chances are you've been told to avoid fillers. Uninterrupted orations will make you sound more intelligent, more thoughtful.

But that might be all wrong. Nixing the words could leave us sounding robotic or unnatural. And honestly, who wants a hollow Twinkie? Let's get to the good stuff: the usefulness of these monosyllables.

Barack Obama was known for punctuating his speeches with extended "uhs," and Justice Antonin Scalia peppered his musings with plenty of fillers. Two of the most intellectual men Washington, D.C., has seen in decades.

Scientists have been sussing out why these verbal crutches persist:

Context: "Like," for example, can signal imprecision, as in, "He is, like, 6 feet tall."  "Uh" can signal a delay, and "um" a more significant delay during which thoughts are being gathered.

It's important to note fillers do serve a purpose for the speaker, like taking time to think, and for the listener by providing signposts for what's coming in a conversation. So the truth is "filler" might be like a misnomer.

A linguistic anthropologist writes for Quartz: "These discourse markers do an immense amount of important social and emotional work for us. They add nuance and richness to our speech."

Are there times when it's wise to avoid "fillers"? Sure. Defending your PhD dissertation, delivering wedding vows, denying you're an arsonist. Some occasions call for sturdy assertions.

And of course, when you’re writing. That's⏤uh⏤for clarity. You know?