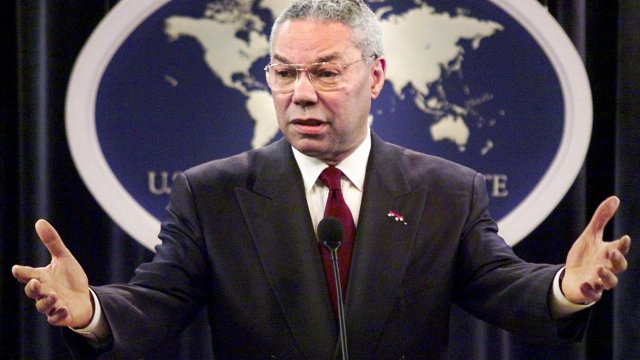 Foreign policy leaders memorialized former Secretary of State Colin Powell Monday, who spent the better part of his life helping shape American diplomacy and served as a mentor to some of our nation's current leaders.

"His people would walk through walls for him," Secretary of State Antony Blinken said.

"He always made time for me, and I could always go to him with tough issues," Secretary of Defense Lloyd Austin said. "He always had great counsel."

Powell spent 35 years as a soldier before serving as a national security adviser, chairman of the Joint Chiefs of Staff and as secretary of state, leaving an imprint on leaders around the globe.

Former British Prime Minister Tony Blair called him a towering figure and someone of immense capability and integrity. Former Prime Minister John Major said he couldn’t have asked for a stronger ally who "led with calm authority, and was an inspiration to all those who served alongside him."

But Powell wasn't always the revered leader he is today. As secretary of state, he told the United Nations in 2003 the U.S. had reason for going to war in Iraq.

"There can be no doubt that Saddam Hussein has biological weapons and the capability to rapidly produce more, many more," Powell said. "And he has the ability to dispense these in ways that can cause massive destruction. We have evidence these weapons existed. We don't have evidence they have been destroyed."

The allegations, proven to be untrue, haunted Powell. He called it a blot on his record — one that Iraqis still remember.

"Colin Powell is one of the personalities who contributed to creating a huge gap in Iraqi society through the occupation which spread corruption, killed many, destroyed many, and ignited sedition within Iraqi society. Colin Powell will face the Lord, but with a lot of Iraqi blood on his hands."

But for so many, Powell was a man focused on international cooperation.

"I've always felt strongly that we should try to solve conflicts in this world through negotiations, through diplomacy," Powell said. "Anytime we can solve a problem that way and not use force, and satisfy our objective, let's push for that."