The Latest On Brussels: Third Suspect Arrested, US Victims Identified 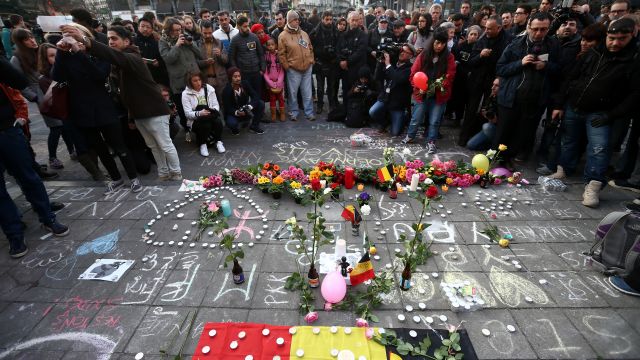 SMS
The Latest On Brussels: Third Suspect Arrested, US Victims Identified
By Matt Picht
By Matt Picht
March 26, 2016
Justin and Stephanie Shults were killed in an explosion in Brussels Airport on Tuesday.
SHOW TRANSCRIPT

Authorities in Belgium have been working to identify the victims of a pair of bombings in Brussels, which killed 31 people including three suicide bombers Tuesday. Twenty-four of the 28 victims have been identified so far, including two Americans.

Justin and Stephanie Shults, originally from Tennessee and Kentucky respectively, were dropping Stephanie's mother off at Brussels Airport when it was attacked. The couple's employers, Mars Inc. and Clarcor, released statements confirming the two were killed in the airport blast.

Eleven of the victims from the attack have been identified as foreign nationals so far, from countries as far-flung as China and Peru. Additionally, former Belgian ambassador André Adam was killed in the attack.

Belgian authorities arrested and charged a man Saturday, only identifying him as Fayçal C., in connection with the attacks. Officials say they can't confirm whether the man is the third alleged bomber in the Brussels airport attack.

The suspect has been identified by Belgian media as Fayçal Cheffou, a self-identified independent journalist who according to broadcaster VRT posted videos online advocating for radical Islam.

Two other people were also arrested on terrorism charges in Belgium on Saturday. Those arrests weren't directly connected to the Brussels attack, but police said one of those suspects might be connected to a terror plot foiled in France on Thursday.

This video includes images from Getty Images and clips from RTBF.