The Latest Key Developments In Ukraine 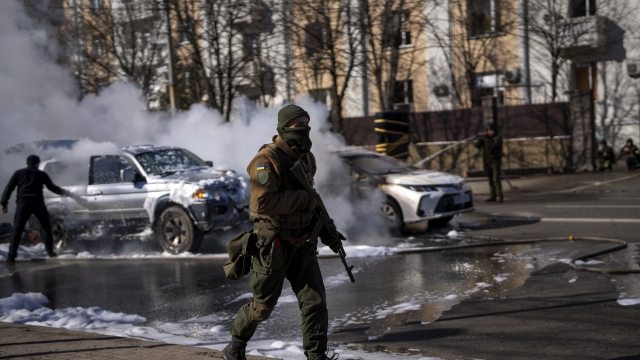 SMS
The Latest Key Developments In Ukraine
By Newsy Staff
By Newsy Staff
February 28, 2022
Russia has yet to fully seize any major city, but many analysts warn the Russian offensive is steadily continuing.

Russian forces ratcheted up their attack on Kharkiv, the second largest city in Ukraine. According to the Ukrainian government, dozens were killed and hundreds wounded, though it’s unclear how many — if any — were civilians.

A U.S. defense official has claimed Belarus may soon send its own troops to aid Russia. Meanwhile, the U.S. has sent more aid and weapons to Ukraine as part a new package from the White House.

Western intelligence suggests Russia may have "slowed down" its offensive over the weekend on the capitol city of Kyiv due to logistical problems and heavy resistance from civilians, though the Russian government claims the slowdown was intentional.

"Everyone who has combat experience and who can join the defense of Ukraine must immediately arrive at the military commissariat," Ukrainian President Volodymyr Zelenskyy said.

Although Russia is yet to fully seize any major city, many analysts warn the Russian offensive is steadily continuing.

Meanwhile, sanctions from Western powers have caused the Russian Rouble to plunge as much as to 40%. Long lines were seen outside Russian ATMs over the weekend. In an unusual departure from its history of neutrality, Switzerland has also frozen Russian assets.

Ukraine also formally applied today to join the EU, and typically neutral nations Sweden and Finland have held emergency summits under speculation they may be considering joining NATO.

Negotiators from Russia and Ukraine have agreed to hold potential peace talks near the Ukrainian border with Belarus. Though Ukrainian President Zelenskyy noted he was not optimistic, and as of this afternoon, it seemed there was little progress in the talks.

There has been an outpouring of videos and posts on social media about developments on the ground, with some more accurate than others. It's given reporters a unique level of insight into how the invasion progresses, from Twitter threads showing tanks moving toward the border to Google data maps showing traffic patterns that reflected Russian roadblocks ahead of the invasion.