The Lasting Impacts And Goals Of Teaching Black History 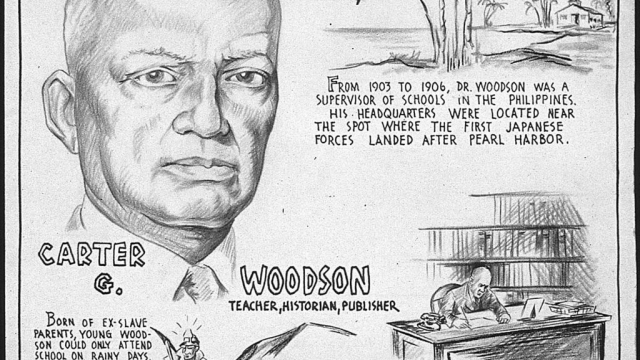 SMS
The Lasting Impacts And Goals Of Teaching Black History
By Casey Mendoza
By Casey Mendoza
February 20, 2019
"Those who have no record of what their forebears have accomplished lose the inspiration which comes from the teaching of biography and history."
SHOW TRANSCRIPT

During the first-ever Negro History Week, historian Carter G. Woodson said: "If a race has no history, if it has no worthwhile tradition, it becomes a negligible factor in the thought of the world, and it stands in danger of being exterminated."

Those words echo the problems we face today regarding the teaching of black history. And as bleak as they may sound, Woodson's words emphasize why he wanted people to learn it in the first place.

LaGarrett King: "A better society. And the reason why I said a better society is that a lot of people point to, kind of recently, the racial tensions, and they sort of kind of blame what's going on in the government, and ... not really realizing that these particular tensions have always been prevalent within society, right?

Decades after Woodson, experts like Professor LaGarrett King can't stress enough how important history is when dealing with long-standing problems like police brutality, voter suppression and racial harassment. Oftentimes, when issues like these are discussed today, they're isolated from historical context and misunderstood as a result.

"I think one of the biggest problems is that we have structured this 'black as enslaved' paradigm in our society. And there are severe implications to understanding black people as only enslaved, right? And one of those implications is this notion that black people did nothing for democracy.

Other experts in the field agree that the "underacknowledgement" of black activists contributes to modern-day oppression. They say fixing those problematic narratives and recognizing the work of black leaders can empower black youth and ease the psychological impacts of present-day racial hostility.

Going back to the start of black history education's development, it's worth noting that supporting black students and teaching them their history was one of Carter G. Woodson's goals.

Emphasizing the need for black history education, the historian once said: "Those who have no record of what their forebears have accomplished lose the inspiration which comes from the teaching of biography and history."