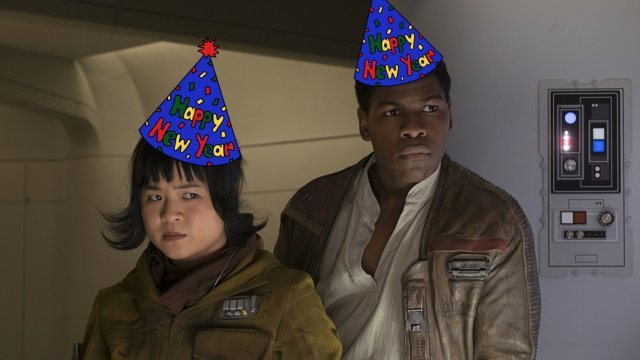 SMS
'The Last Jedi' Celebrates NYE By Passing $1B At The Box Office
By Jamal Andress
By Jamal Andress
December 31, 2017
Since "the Force awoke" in 2015, each new "Star Wars" film has brought in upwards of $1 billion at the worldwide box office.
SHOW TRANSCRIPT

Congrats, guys, you made it. It's nearly 2018, and you've only watched "Star Wars" three times. New Year's resolution: self control.

Taking the No. 1 spot for the third week in a row is "Star Wars: The Last Jedi," bringing in an estimated $52 million. That helped push its worldwide total well past the $1 billion mark.

Since "the Force awoke" with Episode VII in 2015, each new "Star Wars" film has brought in upwards of $1 billion at the worldwide box office. Domestically, all three — "The Force Awakens," "Rogue One" and "The Last Jedi" — have also managed to be the highest-grossing films of the year the last three years, despite their December release dates.

After just three weeks in theaters, "Star Wars: Episode VIII" has surpassed the domestic box-office haul of "Beauty and the Beast," which spent more than four months in theaters across the country and made just over $500 million in the U.S.

All that said, we'll have to wait and see just how far this film can go. But it's already in the top 10 highest-grossing films of all time domestically, and it's been out for less than a month.

Taking the No. 2 spot and pulling off an extremely rare feat at the modern-day box office is "Jumanji: Welcome to the Jungle," pulling in an estimated $50.5 million in its second week out.

If you're a box-office nerd like me, you know that the movie's box-office haul this week is actually bigger than what it pulled in during its debut weekend, and for the record, that hardly ever happens.

More importantly, it hardly ever happens alongside a huge movie draw like "Star Wars" and several other films serving as Christmas competition.

And rounding out the top three this New Year's weekend is "Pitch Perfect 3," bringing in an estimated $17.7 million in its second week out.

As for next week, start the new year off right with ... whatever this is.