The Largest Volcano In Centuries Is Spewing Toxic Gas 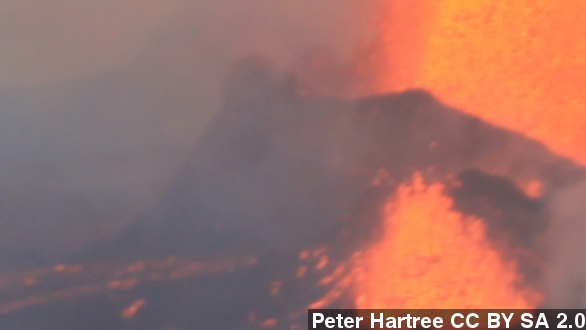 SMS
The Largest Volcano In Centuries Is Spewing Toxic Gas
By Rosie Newberry
By Rosie Newberry
October 16, 2014
One of the largest volcanic eruptions in centuries is occurring on Iceland. The volcano Bardarbunga is producing high levels of sulfur dioxide.
SHOW TRANSCRIPT

The land of fire and ice is experiencing its greatest volcanic eruption in about 300 years.

Iceland is currently monitoring the eruption of Bardarbunga, which began in August 2014, triggered by an earthquake. (Video via YouTube / Photovolcanica)

Iceland has 30 active volcano systems and has produced one-third of the world's lava output since the 1600s. (Video via RT)

A volcano researcher at the University of Edinburgh told Newsweek that Bardarbunga is "spraying out of the ground as high as the Statue of Liberty is tall" and is covering more than half a square mile in lava flow each day.

The constant spread of lava, however, is not the biggest point of concern for researchers and scientists.

The focus instead is on the increase in the emission of sulfur dioxide, a common byproduct of volcanic eruptions. Bardarbunga is currently outstripping the emissions of any other Icelandic volcano eruption in the past several centuries. (Video via Euronews)

The Iceland Review reports that sulfur dioxide pollution is now more than double the maximum safety limit for humans and animals in northern parts of Iceland and more than six times the safety limit in eastern Iceland.

Even more troubling is that, depending on the shift of the wind, Iceland's major population center to the southwest, Reykjavik, could be in the path of this sulfur dioxide plume. This capital city is home to more than 100,000 people. So far, the gas has spewed into mainly unpopulated areas of the island, affecting few.

But scientists are worried about sulfur dioxide because exposure to high levels of the colorless gas can be life-threatening.

According to the Centers for Disease Control and Prevention, effects of sulfur dioxide on people and animals include "burning of the nose and throat, breathing difficulties, and severe airway obstructions." These problems are worse for anyone already struggling with normal lung function, like asthmatics.

Bardarbunga doesn't appear to be stopping — or even slowing — soon, which means sulfur dioxide emissions could even increase. Decoded Science reports that Bardarbunga has a Volcanic Explosivity Index of 5 out of 8, which means this eruption could be on par with the likes of Mount Vesuvius and Mount St. Helens.

This video includes an image from Getty Images and peterhartree / CC BY SA 2.0.