A Who's Who Guide To The Trump-Biden-Ukraine Scandal 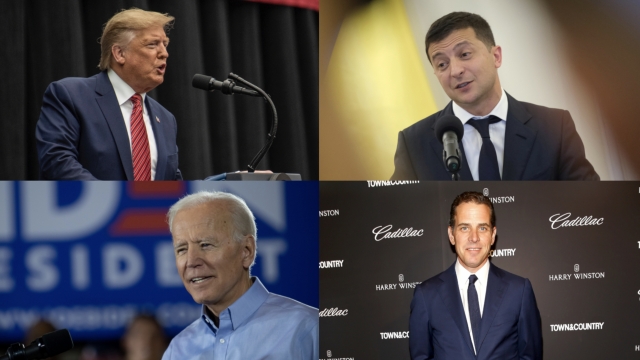 A scandal involving President Trump, Ukraine and former Vice President Joe Biden has dominated headlines for days. You may have been hearing a lot of unfamiliar names lately. So we're going to spell out who the key players are. Let's start with the Ukrainians.

Ukrainian President Volodymyr Zelensky: The former comedian and actor was sworn in as Ukraine's president in May 2019. A phone call between him and President Trump is reportedly at the center of a whistleblower complaint alleging President Trump made an inappropriate promise to Zelensky.

Petro Poroshenko: He was Ukraine's president between 2014 and 2019. He took office just a couple months after Russia annexed the Crimean peninsula, and the Ukrainian government at the time was fragile.

Viktor Shokin: He was the Ukrainian prosecutor general from February 2015 to March 2016. Several western countries, including the U.S., believed he was blocking anti-corruption efforts within Ukraine. Shokin was forced to submit his resignation in February 2016, and the Ukrainian parliament voted to approve it the next month.

Mykola Zlochevsky: He founded Burisma Holdings, a natural gas company in Ukraine. He had been accused of money laundering, tax evasion and corruption, according to The New York Times. His actions have been investigated on and off since 2014.

Joe Biden: The former U.S. vice president spearheaded diplomatic talks with Ukraine. He spoke with Poroshenko frequently, talking about Russian aggression in eastern Ukraine, rooting out corruption in the Ukrainian government and the need for humanitarian assistance. Biden used a $1 billion loan guarantee as leverage to oust Shokin.

Hunter Biden: He is the youngest son of the former vice president. In the spring of 2014, Hunter Biden joined the board of directors for Burisma Holdings. Even though Hunter Biden didn't have a role in the Obama administration, some viewed his position on the board as a conflict of interest for his dad.