The Kentucky Derby: An Unofficial Guide To The Best And Worst Headwear 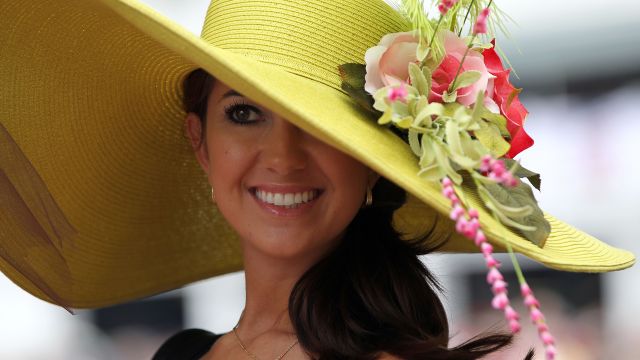 The 2016 Kentucky Derby is here, and while you're sipping on mint juleps and betting on horses, you'll need to know what types of hats are acceptable to wear.

Because there's nothing more iconic about the Derby than those hats. We're taking a look at the best (and worst) types of hats you'll see at the Kentucky Derby.

Back when the annual horse race began in 1875, it was advertised as an event for female attendees to show off the finest clothes — and hats — in their wardrobes.

The Derby's website suggests women go for "elegance and style" while wearing wide-brimmed hats accessorized with flowers and colorful ribbons.

Now, the men's hats usually aren't as big and bold, but that doesn't make them any less important.

It's tradition to go with a fedora or bowler hat inspired by the 1920s.

But who says you can't break away from tradition every so often?

More attendees seem to be flaunting headwear that looks more crafty than couture.

Such as this brown flower-adorned headpiece. Or this fake-fruit-covered pink hat.

And don't forget the feathers. So. Many. Feathers.

And then there are those who take things really over the top. We're calling it the "hot-gluing your children's toys all over your hat" kind of look. Some attendees have even set out to re-create the Kentucky Derby on their heads.

If you choose to go that last route, you're braver than we are.

This video includes clips from the Kentucky Derby and images from Getty Images.