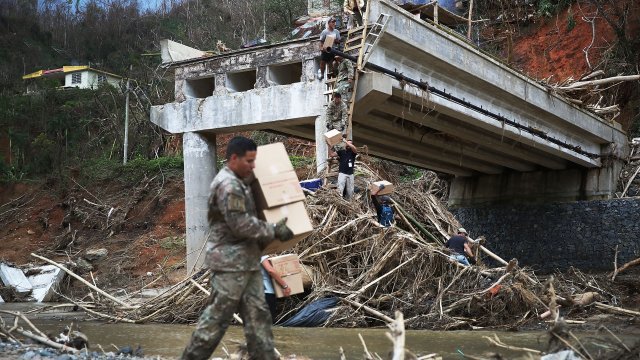 Foreign ships will no longer be able to bring aid from U.S. ports to hurricane-stricken Puerto Rico.

The U.S. is not extending a waiver of the Jones Act, a law that says goods shipped between U.S. ports must be carried on U.S. ships.

President Donald Trump chose to waive the act last month after several members of Congress said it would allow Puerto Rico better access to supplies like food and medicine.

Trump agreed to waive the act for states affected by hurricanes Harvey and Irma. The administration has been criticized for what some call a sluggish response to Puerto Rico's situation.

Now, it may be harder for Puerto Rico to get those supplies at a time when it really needs it.

Puerto Rico's Gov. Ricardo Rosselló is asking Congress for over $4 billion to help with recovery efforts. And that's just for what he calls the "immediate emergency needs."

Sen. John McCain recently introduced legislation to get rid of the Jones Act. He called it "an antiquated, protectionist law that has driven up costs and crippled Puerto Rico's economy."

Still, Puerto Rico has a supply distribution problem and no waiver is going to fix that.

Many residents say they haven't received any of the delivered aid.

That's partly due to a lack of truck drivers, as well as poor road conditions. As of late last month, a lot of aid delivered to Puerto Rico was still sitting at the ports.

And Rosselló told CNN he's ordering an investigation into reports that say aid is being mishandled. He said, "If there is a place, a locality that is not delivering food to the people of Puerto Rico that need it, there's going to be some hell to pay."

Correction: A previous version of this story incorrectly described the Jones Act.