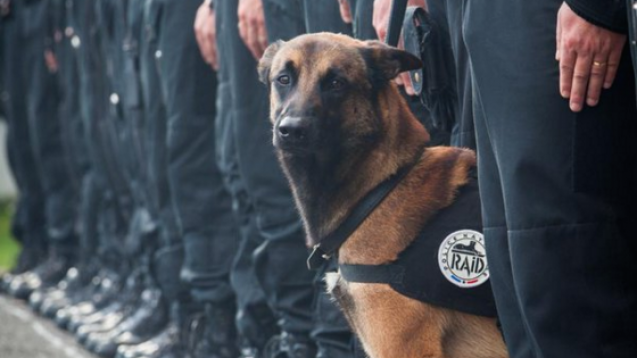 SMS
The Internet Is Mourning A Police Dog Killed During The French Raids
By Katie Link
By Katie Link
November 18, 2015
A police dog named Diesel died in the line of duty during the raid in Saint-Denis, France Wednesday morning.
SHOW TRANSCRIPT

The terror attacks in Paris have claimed another victim. This time, it was a 7-year-old Belgian shepherd named Diesel.

French authorities tweeted the sad news Wednesday that the police dog was killed in the line of duty during the early morning raid in Saint-Denis.

Tributes praising Diesel for her work have popped up all over social media. More than 20,000 people liked a Facebook page honoring the dog just hours after her death was confirmed.

And the hashtag #JeSuisChien started trending on Twitter. It translates to "I am dog" and takes after the popular hashtag #JeSuisCharlie that circulated following the Charlie Hebdo attacks in Paris.

People also posted pictures of their own dogs as they thanked Diesel for her service.

During the raid two suspects died and eight people were arrested. Five French police officers sustained injuries but are expected to recover.